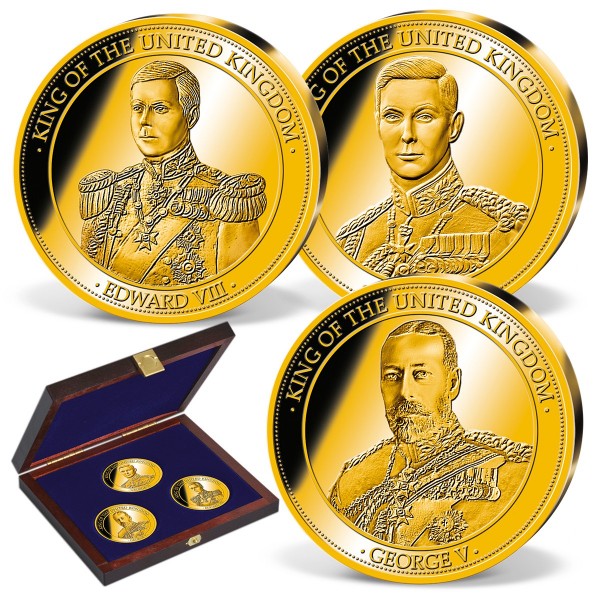 Description
Description
1936 was a very special year in British history - and without the events of that year, Elizabeth... more
Close menu
'Year of 3 Kings' Commemorative Set

1936 was a very special year in British history - and without the events of that year, Elizabeth II would not be our Queen today.

On the 20th of January 1936, King George V died. His eldest son Edward ascended to the throne and became King Edward VIII. Edward was the uncle of Elizabeth, who was just 10 years old at that time. He was, however, in love with an American divorcee, WallisSimpson, whom he planned to marry, so he had to decide between his love and the throne. Edward VIII chose to abdicate just eleven months into his reign, romantically proclaiming that it was impossibleto carry out his duties 'without the help and support of the woman I love'. He remains the only British monarch to voluntarily abdicate the throne.

Upon his abdication in December 1936, Edward's younger brother 'Bertie' - Elizabeth's father - unexpectedly became King GeorgeVI. This remarkable turn of events meant that suddenly young Princess Elizabeth was now first in line to the throne, she was set to become our future Queen, changing the course of British history.

In celebration of the 100th anniversary of the House of Windsor, this stunning collection of commemorativestrikes is available as a complete set. attention to detail, these 3 special strikes are regarded as real rarities, which should not be missing from your collection! Minted in the highest quality 'PROOF', this stunning set is strictly limited to just 9,999 complete