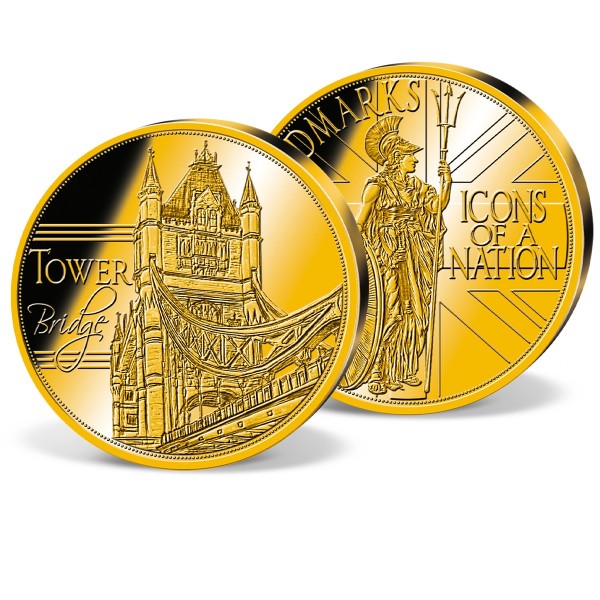 125 years ago, on 30th June 1894, Tower Bridge was officially opened by the Prince of Wales (the future King Edward VII) on behalf of Queen Victoria, in the presence of the Princess of Wales and other members of the Royal Family.

The opening was celebrated under a clear blue sky, with a pageant on the River Thames, and tens of thousands of spectators lining the riverbanks. Tower Bridge was considered to be among the greatest engineering triumphs of the Victorian era.

For over a century, Tower Bridge has been one of London's most famous landmarks. This spectacular Britishicon has now been honoured with a new commemorative strike in solid gold - a symbol for the golden era of Great Britain and its magnificent achievements.

1877
The 'Special Bridge or Subway Committee' was formed, chaired by Sir Albert Joseph Altman, to find a solution for a river crossing downstream of London Bridge, that still allowed sailing ships access to the port in thepool of London. A design competition was held, and over 50 designs were submitted.

1884
A design submitted by Sir Horace Jones, the City Architect, in collaboration with John Wolfe Barry, was approved.

1885
An Act of Parliament was passed authorising the construction of the new Gothic style bridge, which specified that the opening span must give a clearwidth of 200 feet and a headroom of 135 feet.

1886
Construction began with 5 major contractors and 432 construction workers working on the bridge.

30th June 1894
Tower Bridge was officially opened by the Prince and Princess of Wales (the future King Edward VII) and Queen Alexandra.

1942
A third engine was installed as a precaution during WWII. The engine became redundant in 1974, when the bridge system was modernised.

1974
The original opening mechanism was replaced by a new electro-hydraulic drive system.

1982
The Tower Bridge Exhibition opened, housed in the bridge's twin towers, the high-level walkway and the engine rooms.

2000
A computer system was installed to remotely control the raising and lowering of the bridge.

2008-2012
Tower Bridge was given a facelift that took 4 years to complete. The metal parts were repainted in blue and white, a new lighting system was installed in the walkways, and the 4 suspension chains were renovated.

2012
The bridge featured in publicity for the 2012 Summer Olympics held in London.

2019
The 125th anniversary ofthe opening of Tower Bridge is commemorated by Windsor Mint with a stunning solid gold strike.