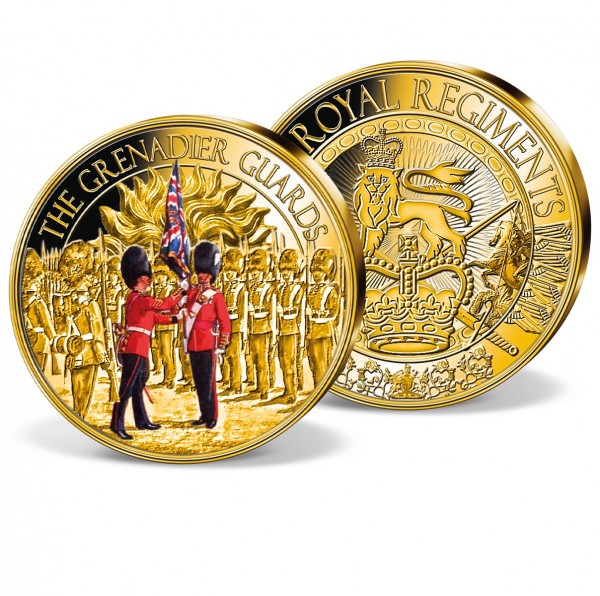 Description
Description
Especially in times of great disruption and change, we hold on to our proud traditions and... more
Close menu
'The Grenadier Guards' Commemorative Strike

Especially in times of great disruption and change, we hold on to our proud traditions and values. One of the British regiments to perfectly symbolise these values are the famous Grenadier Guards,first formed in 1656.

When Cromwell defeated Charles II at the Battle of Worcester in 1651, Charles fled into exile to mainland Europe. In 1656, while in Bruges, he founded the 'Royal Regiment of Guards', recruited from the loyal men who had followed their King into exile.

Once Charles II was restored to the throne in 1660, the men were rewarded, and in 1665 the regiment was renamed the 1st Regiment of Foot Guards. They fought in the Wars of the Spanish Succession, the Revolutionary and Napoleonic Wars, and came to everlasting fame when they defeated the Grenadiers of Napoleon's Imperial Guard at the battle of Waterloo in 1815, where they gained their title of 'Grenadier Regiment of Foot Guards'.

Now one of the oldest and most iconic regimentsin the British army, its members are still renowned for their determination, loyalty and grit. Ready to be deployed anywhere in the world at short notice, the Grenadier Guards arefast, mobile and specialise in in Light Role Infantry operations.

But it is often their other role that brings them fame all over the world: in their scarlet tunics and bearskins, they carry out ceremonial duties in London and at Windsor Castle, guarding the Royal Palaces and displaying excellence, symmetry and precision.

Honour this prestigious and world-renowned regiment with a new precious strike, layered with 24-carat gold. The first ever of its kind, this stunning strike with gold and colour application has been officially licensed from the Ministry of Defence and is strictly limited to just 9,999 complete editions worldwide.