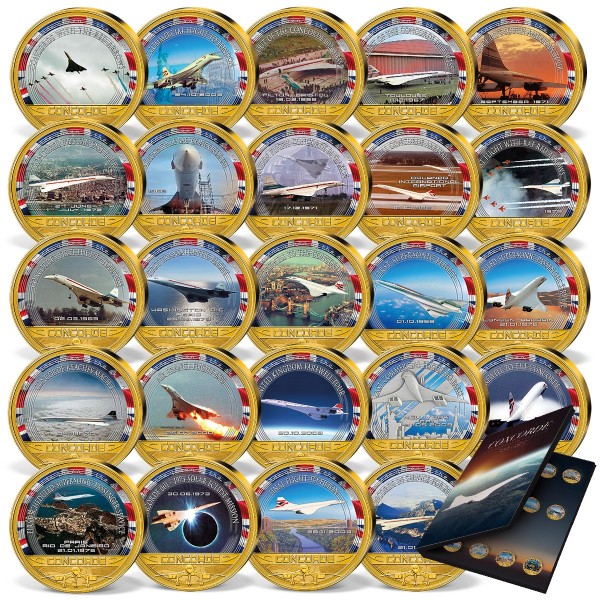 Description
Description
Special complete set celebrating Concorde, the 'Queen of the Skies'. It has now been 45... more
Close menu
The 'Concorde' Complete Set

Special complete set celebrating Concorde, the 'Queen of the Skies'.

It has now been 45 years since the first commercial flight of one of the most beautiful aircraft ever built - Concorde. This aviation legend has been celebrated with an exclusive complete set of 24 commemorative strikes, preciously layered with 24-carat gold and finished with stunning colour detailing.On 2nd March 1969, chief test pilot Andre Turcat flew the Concorde prototype 001 on its historic first flight from Toulouse, France. Seven months later, on 1st October 1969, the British-French Concorde achieved its first ever supersonic flight. On 21st January 1976, two Concordes took off simultaneously, one from British Airways and one from Air France, on the world's first scheduled supersonic passenger flights.

Concorde made its final commercial flight on 24th October 2003, flying 100 passengers at twice the speed of sound, from New York's JFK International Airport to London Heathrow. A large crowd gathered at Heathrow to watch the final landing, as the supersonic jet was retired from service.

You now have the opportunity to secure a sensational complete set of 24 commemorative strikes, issued in honour of the 'Queen of the Skies'. Strictly limited to only 2,003 complete collections worldwide and beautifully presented inan exclusive collector's album - this sought-after edition is a collection to treasure.