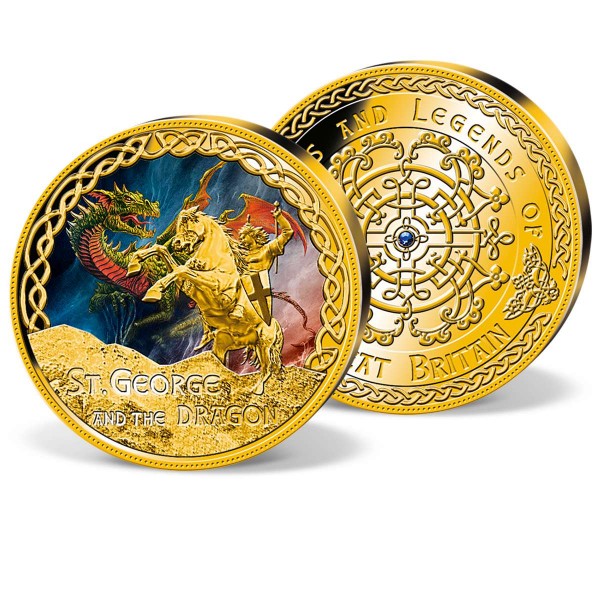 Your exclusive advantages:
Amount due: £59.95

Description Benefits of our Collector Service
Description
Every year, on the 23rd of April, England celebrates St George's Day. Everyone knows the... more
Close menu
'St George and the Dragon' Commemorative Strike

Every year, on the 23rd of April, England celebrates St George's Day. Everyone knows the legendary image of St George slaying the dragon, it's a motif that has featured on our Sovereign coins for exactly 200 years. St George is the patron saint of England, his emblem, a red cross on a white background, is the flag of England. Although he is associated with England and English ideals of honour and bravery, the real St George wasn't actually English at all - he was born in Cappadocia, which is now in Turkey, in the 3rd Century, but very little is known about him.

The legend of St George slaying the dragon became popular in the 12th Century, in the Middle Ages when dragons were often used in stories to represent the Devil. The legend became famous when it was printed in 1483 by Caxton in a book called 'The Golden Legend'.

Once upon a time St George travelled to Libya, where he met a hermit who told him about a ferocious plague-bearing dragon that was terrorising the country. To appease the dragon, the townspeople fed it two sheep every day. When they ran out of sheep, the dragon demanded they sacrificed a young maiden each day. When only the king's daughter was left, the king offered her hand in marriage to the knight who could slay the dragon. The next day St George rode out to the lake where the dragon lived, and sent the princess home to her palace. The dragon roared louder than thunder and rushed at him. St George charged and struck him with his spear, but the dragon's scales were so hard that the spearbroke into pieces. St George fell from his horse, but bravely used his sword to slay the dragon under its wing where there were no scales, and the dragon fell dead at his feet.

Now thefamous legend of St George slaying the dragon has been honoured with a sensational strike, layered with finest 24-carat gold and hand-set with a genuine Swarovski® crystal.