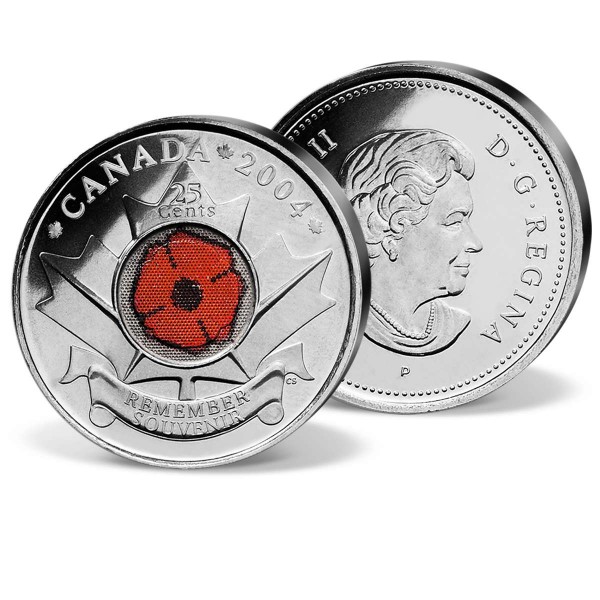 'In Flanders Fields the poppies blow
Between the crosses, row on row,
That mark our place; and in the sky
The larks, still bravely singing, fly
Scarce heard amid the guns below.
We are the Dead. Short days ago
We lived, felt dawn, saw sunset glow,
Loved, and were loved, and now we lie
In Flanders fields.

In 2004, the Royal Canadian Mint achieved a world first, when it released the world's first coloured circulation coin. Minted to commemorate those brave men and women who died while in the service of the nation, the 25-cent circulating coin has become affectionately known as the 'Poppy Quarter'. Interestingly this, the world's first circulating coloured coin, also achieved notoriety when the United States Department of Defense mistook it for a 'nano-technology' spy coin.

The obverse of the coin features the portrait of Queen Elizabeth II. The central image on the reverse is, of course, the poppy, a time-honoured symbol of First World War sacrifices, based on the poem 'Flanders Fields' which was written on the battlefields of Flanders during the First World War, by Canadian Officer and army doctor John McCrae.

Make sure you don't miss this opportunity to secure the world's first coloured coin made for circulation for your collection - already considered to be one of the world's most sought after circulation!