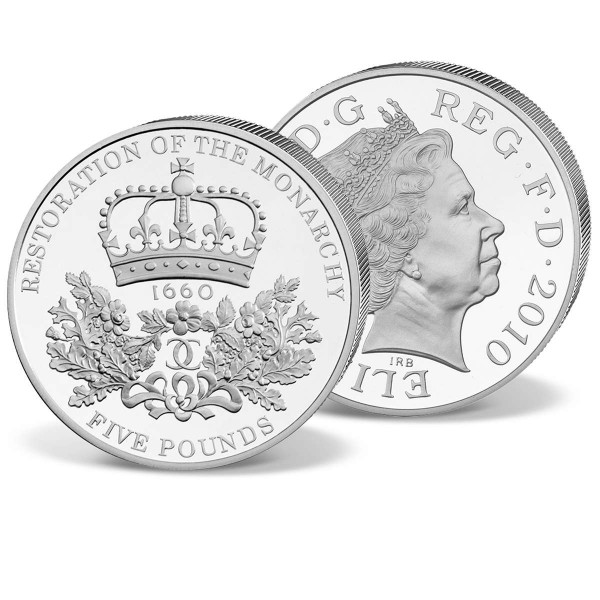 Description
Description
It was on the 25th May 1660 that Charles II landed at Dover to reclaim the throne thereby ending... more
Close menu
Official Royal Mint £5 'Restoration of Monarchy'

It was on the 25th May 1660 that Charles II landed at Dover to reclaim the throne thereby ending eleven years when England, Wales, Scotland and Ireland had no monarch and were to all intents a republic.

Our Royal Family is an institution steeped in tradition and history and 2020 marks an important milestone as it was 360 years ago, in 1660, that Charles II ended the era of the republican government and restored the English, Scottish and Irish monarchies. Over the years since The Restoration, the nature of our Monarchy has evolved resulting in today's constitutional Monarchy.

Designed by David Cornell this coin features on its reverse a simplified Heraldic crown of Charles II. Beneath is an ornate engraving of an English rose and Scottish thistle with oak leaves and oak apple flowers.

Expertly crafted by the Royal Mint this brilliant uncirculated £5 crown, celebrates 360 years since the Restoration of the Monarchy. Strictlylimited to just 50,000 pieces worldwide, order your £5 crown today.