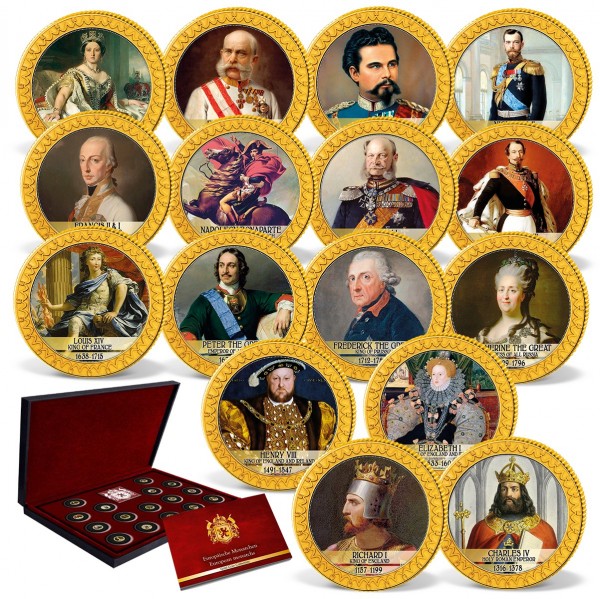 Description
Description
For the first time ever, 16 of the most famous European monarchs have been joint in a... more
Close menu
'European Monarchs' Complete Gold Coin Set

For the first time ever, 16 of the most famous European monarchs have been joint in a breathtaking set of official gold coins with rare colour finish.

Each individual gold coin is atribute to a great sovereign - from Emperor Wilhelm I to the legendary King Ludwig II, Queen Victoria and Henry VIII - men and women, who shaped our history! Secure this unique treasure in finest gold (999/1,000) now, before they disappear in the vaults of other collectors - not only in Europe.

A unique tribute to the most famous sovereigns in Europe
Catherinethe Great, the smart Empress
Charles IV, the first European
Wilhelm I, first Emperor of the German Empire
Francis II/I, first and last emperor
Franz Joseph I, the Emperor of 68 years
Elizabeth I, ruler of the world
Henry VIII, king with six wifes
Louis XIV, the Sun King
Ludwig II, the Fairytale King
Napoleon Bonaparte, the Emperor of the French
Napoleon III, the last Emperor of France
Nicholas II, the last Tsar of Russia
Peter the Great, the humble tsar
Richard I, the legendar Lionheart
Victoria, founder of a new era
Frederick the Great, European aesthete