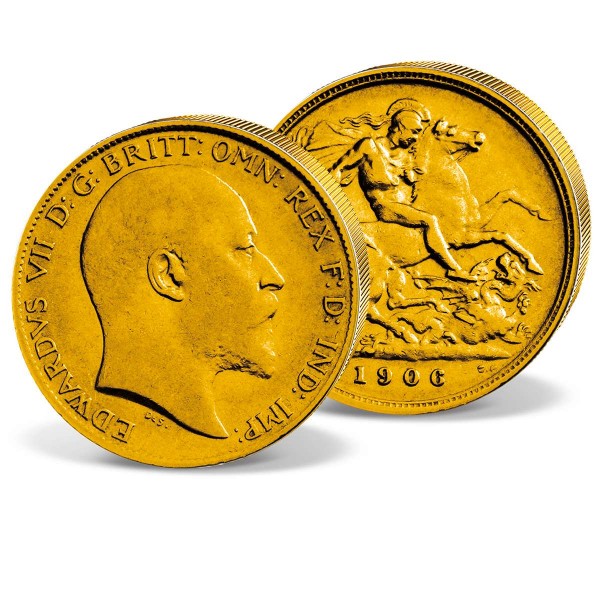 This product is currently not available.
Please inform me as soon as the product is available again.
Amount due: £589.00

The British Sovereign is a historically significant bullion coin that was first minted in the late 15th century. After a period of losing its importance (17th- 18th century), the Sovereign was revived in the early 19th century (minted from 1817), and became legal tender in more than 20 different countries, it even superseded the circulation of the gold 'guinea' coin. The 'modern' Sovereign is still produced today.

Steeped in tradition; for almost the last two hundred years each of our monarchs have issued gold sovereigns struck in their image. The mythical and enduring reverse design by Benedetto Pistrucci of St. George slaying the dragon has remained relatively unchanged since 1817 and still features on sovereigns minted today! Gold sovereigns minted during the reign of Edward VII (1902 to 1910) are among the most sought after coins in the world today! After all, they do portray the second oldest man to become a British king (after William IV). As the eldest son of QueenVictoria, Edward VII was actually one of the longest incumbent direct heirs to the throne in our history, however his reign as king was relatively brief, lasting only nine years. Hence original sovereigns minted during his reign, are limited in availability and considered highly sought-after amongst numismatists.