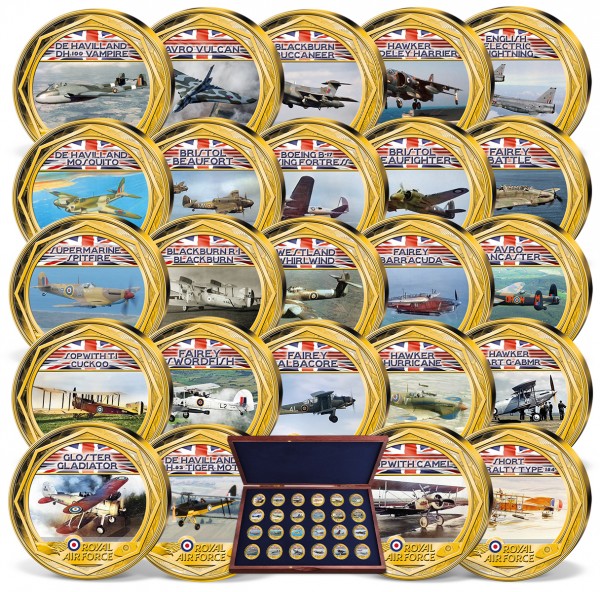 The Royal Air Force, formed a century ago, is the oldest independent air force in the world, and is known for their impressive aircraft.

Amongst the aircraft depicted are The De Havilland Mosquito, known as the 'Wooden Wonder', which served during WWII and was the fastest aircraft in the world at the time. The Avro Lancaster, used for the legendary Dambusters raid, was Britain's mostfamous heavy bomber of WWII - alongside one of the most prolific fighter aircraft, the single-seater Hawker Hurricane. The Sopwith Camel was the RAF's most successful fighter plane of the First WorldWar. While the jet-powered Avro Vulcan became Britain's airborne nuclear deterrent during the Cold War. Other successful military aircraft included in this special collection are the Fairey Swordfishtorpedo bomber, the famous Supermarine Spitfire, and the iconic Tiger Moth.

To celebrate 100 years of the Royal Air Force, the twelve most famous aircraft in the history of the RAF have been commemorated with stunning strikes, layered with 24-carat gold and officially authorised by the Ministry of Defence. Today, Windsor Mint is proud to introduce you to this extraordinary editionin commemoration of the history of aviation, a comprehensive set that will be the envy of any collector. All 24 strikes in this collection have been minted in the highest quality 'PROOF'.