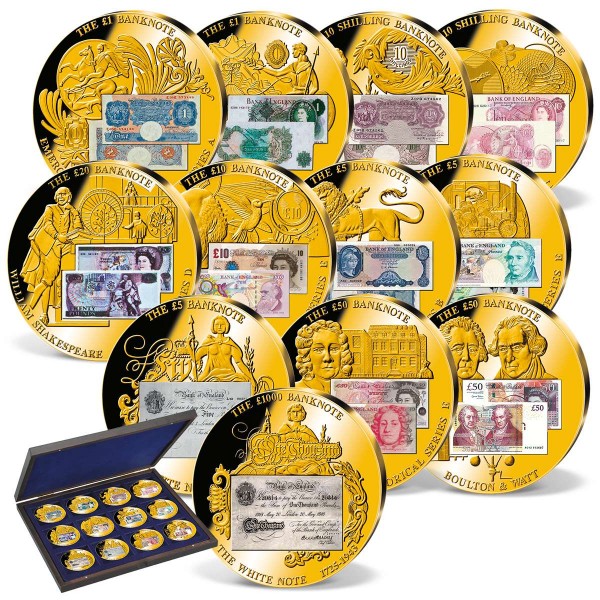 In 1694, William Paterson, a Scottish merchant, obtained a Royal Charter from King William III, to form the Bank of England. The Bank was established to help raise money for the war against France,and began issuing notes in return for deposits. The first banknotes were handwritten in black ink on creamy white paper, and were personally signed by the bank's chief cashier. From 1725 the Bank began issuing partly printed banknotes, to be completed by hand.

During the 18th century there was a move towards fixed denomination notes, and by 1745, notes were printed in denominations ranging from £20 to £1000. The first £10 banknote was issued in 1759, due to the gold shortages from the Seven Years War. Then in 1793, the first £5 banknote was issued, when a lower denomination was required to replace gold coins, following the outbreak of war with Revolutionary France. Because of its black print on white paper, these £5 notes became known as the 'White Fiver'. The £5 remained the lowest denomination until 1797, when a series of runs on the Bank drained its gold reserves, so the Bank began issuing £1 and £2 notes. The first fully printed notes appeared in 1853, which including the chief cashiers printed signature and the words "I promise to pay the bearer on demand the sum of " - , a feature that has remained unchanged to this day.

The past centuries have seen manychanges, not just in the role of the Bank of England, but also from the first handwritten bills of exchange through to the complex and sophisticated designs seen today.