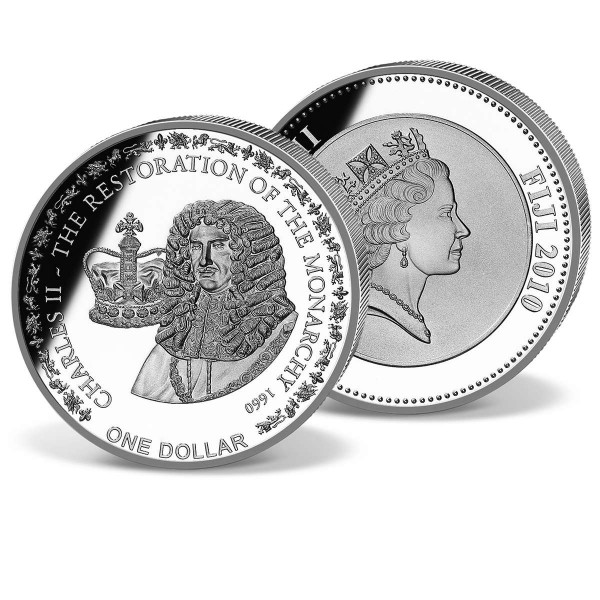 Description
Description
In 2010 it was 350 years ago, in 1660, that Charles II ended the era of the republican... more
Close menu
1 Dollar Fidji 'Charles II - The Restoration of the Monarchy'

In 2010 it was 350 years ago, in 1660, that Charles II ended the era of the republican government and restored the English, Scottish and Irish monarchies. After the death of Oliver Cromwell, Charles II, returned from exile to England landing at Dover on 26th May 1660. Three days later he entered London amid scenes of great rejoicing, it was his 30th birthday. He was crowned Kingat Westminster Abbey a year later and the Monarchy was restored.

Officially issued by Fiji, this new release is limited to only 10,000 coins worldwide. Minted in the highest quality "proof" condition it is plated in pure silver the obverse features a portrait of Her Majesty Queen Elizabeth II. Whilst the reverse shows a masterfully engraved portrait of Charles II, with the coronation crown. This limited edition coin is a must for have for anyone who is fascinated in British history! Order your coin today exclusively from Windsor Mint.