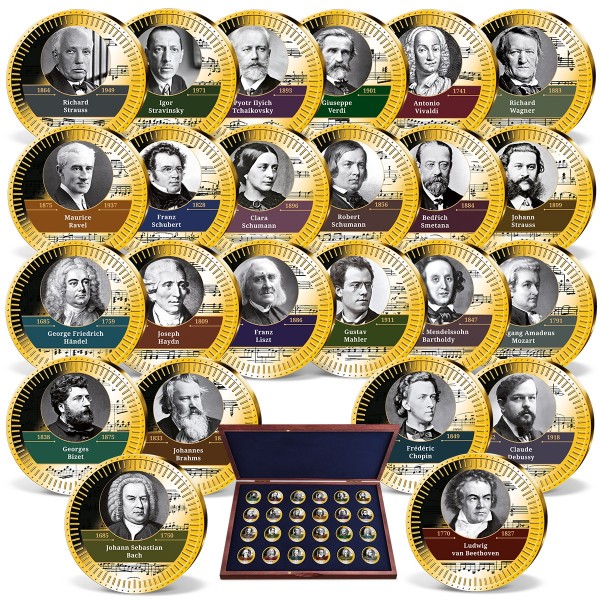 Every age creates its own music - music that transcends borders, time and space. Just like the works of the great European composers such as Beethoven, Verdi, Bach, Tchaikovsky, Debussy and Mozart.These creative geniuses have written some of the most beautiful pieces of music in the world.

In their honour, we have created a lasting memorial: 24 stunning strikes, preciously layered with 24-carat gold with detailed portraits.

Every one of these 24 composers left their unmistakable mark on the world of music and was a true genius of their time. Such as Johann Sebastian Bach, who wrote more than one thousand works during his lifetime. Or Wolfgang Amadeus Mozart, who started to play the piano aged just three and gave his first public concert at the tender ageof five. Or Beethoven who, unbelievably, wrote the EU anthem Ode to Joy when he was already profoundly deaf.

You now have the opportunity to secure this sensational complete set commemorating the greatest masters of classical music. Strictly limited to only 999 complete sets worldwide and beautifully presented in an exclusive collector's album - this sought-after edition is a collectionto treasure.