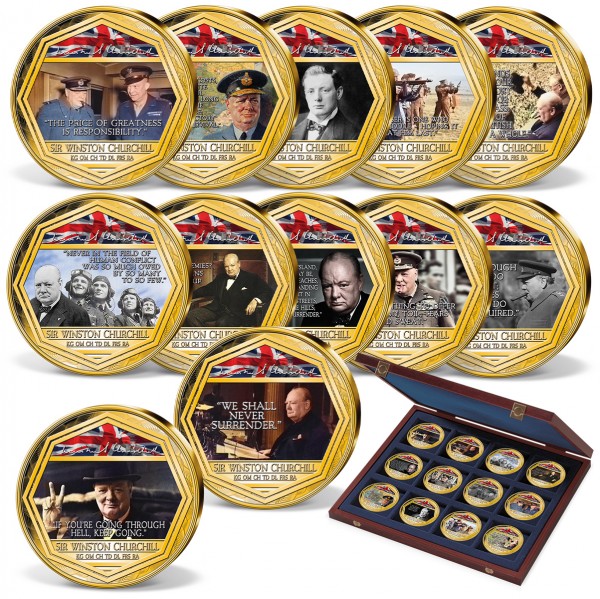 Description
Description
This stunning collection has been issued to commemorate one of the greatest British leaders -... more
Close menu
'Winston Churchill' Complete Set

This stunning collection has been issued to commemorate one of the greatest British leaders - Sir Winston Churchill.

In 1940, Winston Churchill became prime minister and began his 'walk with destiny', leading Great Britain through the Second World War to victory. He was an experienced military leader and by late 1940 Churchill had developed his strategy for British resistance. With his intelligence, eloquence and steadfast determination, he inspired the entire nation to persevere and to 'never surrender' to Nazi Germany. Churchill worked tirelessly throughout the war, he secured support from the United States whilst maintaining an alliance with the Soviet Union, which was crucial to winning the war. Winston Churchill's outstanding leadership steered Britain through WWII, and he will always be remembered as the greatest prime minister in British history.

This exclusive complete set is a special tribute to Sir Winston Churchill. Each strike has been preciously layered with 24-carat gold and finished with stunning colour detailing and features a famous Winston Churchill quote. This limited-edition set comes beautifully presented in a luxury display case.