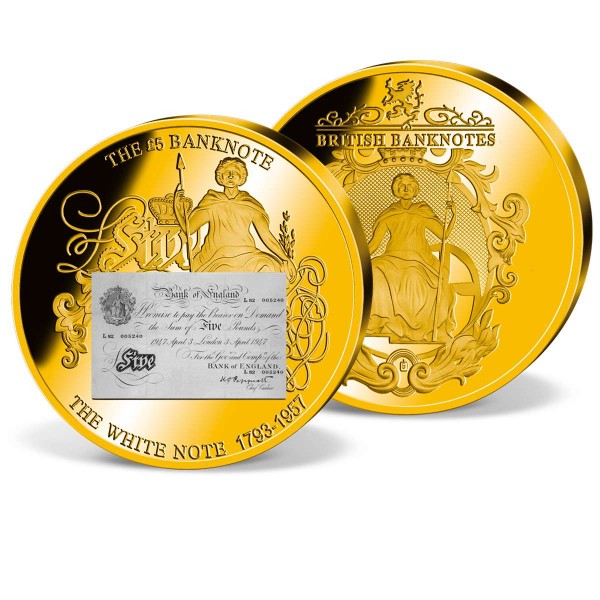 Description
Description
For those of us remembering the good old days of shillings and halfpence, it hardly seems... more
Close menu
'White £5 Banknote' Supersize Commemorative Strike

For those of us remembering the good old days of shillings and halfpence, it hardly seems possible - but it was over 50 years ago on 13 March 1961 that the elegant White Five Pound Note was withdrawn from circulation forever. Commonly referred to as the 'White Fiver' because it was printed on white paper, this banknote is remembered with affection by many of us. Years ago a crisp white five-pound note in your pocket would have been riches indeed. The note was originally issued in 1793 when, following the outbreak of war with Revolutionary France, a lower denomination was requiredto replace gold coins.

Although the Bank of England issued its first colour notes in 1928, the higher denomination notes from £5 to £1000 remained printed in Black and White. The banknotefeatured on this gold plated commemorative coin is the white fiver. First issued in 1793 it was only ever printed on one side and featured a simple, elegant design with a small vignette of a seated Britannia, by the Bank's official seal. The white fiver is still remembered with affection by many people - the design endured until the new coloured 'Helmeted Britannia' £5 was issued in 1957.

The past centuries have seen many changes, not just in the role of the Bank of England, but also from the first handwritten bills of exchange through to the complex and sophisticated designs seen today.