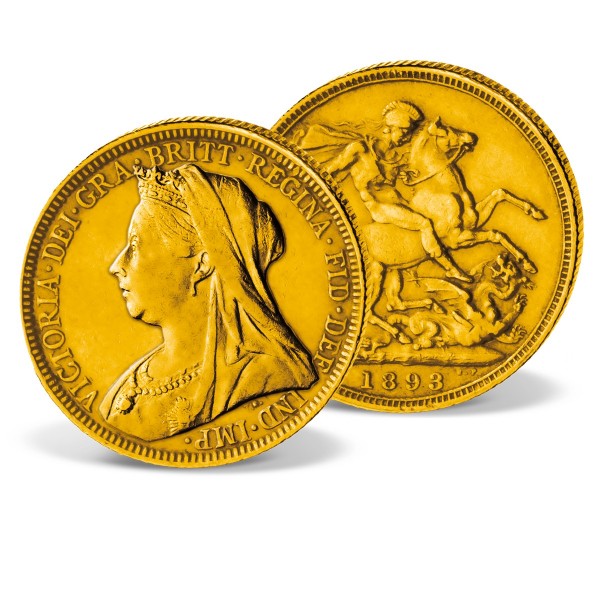 This original Gold Sovereign, struck by the Royal Mint in solid gold, features the last of three portraits of Queen Victoria that have been used for gold sovereign coins: The portrait of the mature, widowed Queen Victoria wearing a veil. Issued 1893 and Victoria's death in 1901, it is the last Victorian gold sovereign and highly sought after by collectors.In circulation between 1893 and 1901, this Victoria Sovereign is the "veiled" or "old head" variant. It depicts the daughter of the Duke of Kent, who was made Queen of England in 1838, without her crown. Under Victoria's 64-year reign, England thrived once more. The reverse of the coin shows Saint George battling the dragon. This design by Benedetto Pristucci replaces the previous shield motif.

The British Gold Sovereign is considered to be one of the most popular gold coins in the world and is also one of the oldest coins that is still being issued today. The coin is steeped in a rich and fascinating history - Henry VIIcommissioned the Royal Mint to mint the first ever Gold Sovereign in 1489, over 500 years ago. The Sovereign received its name from its distinctive obverse which carries mthe portrait of the ruling monarch, which has contributed to the coin's popularity.

Whether you wish to complete an existing sovereign collection, or as a commemorative to the 200th birthday of Queen Victoria, the queenof the golden era of the British Empire - these Gold Sovereigns are a must for every comprehensive coin collection.