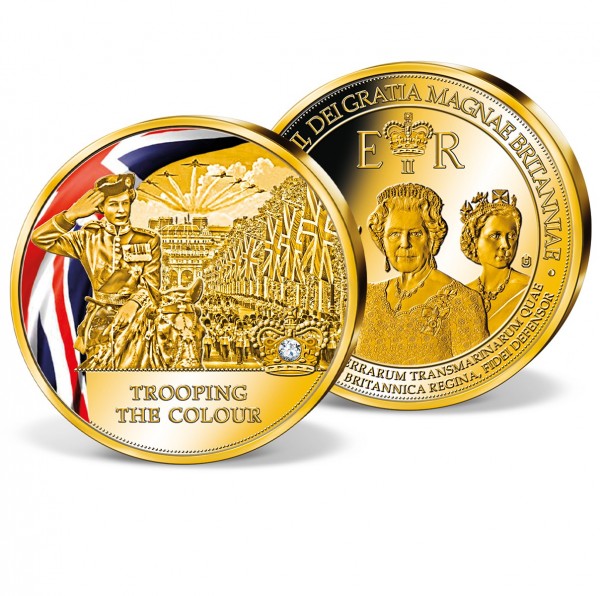 2020's Trooping the Colour, Queen Elizabeth II's annual birthday parade, 13th June 2020, is the first parade to be cancelled in 65 years, due to the coronavirus. In tribute to one of the favourite royal events of the year, a stunning new strike has been issued, featuring highlights of past parades: Her Majesty on horseback and a celebration flypast performed by the Red Arrows.

The world-famous parade began as a military exercise of the British infantry regiments in the 17th century, with the daily parade of the regimental flags, historically known as 'Colours', heldto ensure that every soldier could recognise his own regiment during battle. The ceremony became a special celebration to mark the official birthday of the British sovereign in 1748.

QueenElizabeth II has attended Trooping the Colour in every year of her reign - initially on horseback and from 1987 in a carriage, with an exception in 1955, when a national rail strike prevented the event. Even though the Queen was born on 21st April, traditionally the June parade is when the monarch officially celebrates with the public and her extended family, who gather on a balcony at Buckingham Palace.

Windsor Mint is proud to offer you the opportunity to celebrate in the safety of your home: with a new, special strike finished with 24-carat gold and hand-set with a genuine SWAROVSKI® crystal, at a special celebration price! It might be the best way to celebrate The Queen's birthday in 2020 and a future rarity marking an extraordinary year in British history!