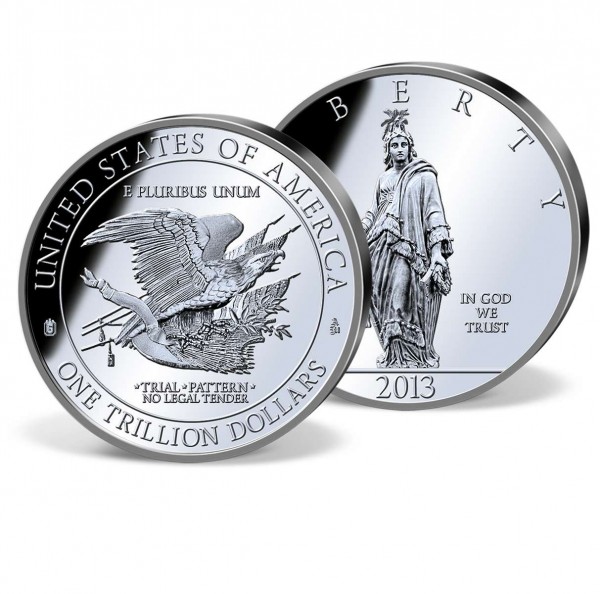 In 2012 agon the American government discussed a striking plan to help cancel some of US's $16.4 trillion debt - the trillion dollar platinum coin!

The proposal involved the US Treasuryminting the coin and then depositing it into its own account at the Federal Reserve thereby wiping out $1trillion of debt. It might sound ludicrous, but it would have be completely legal - a loopholein 1997 federal law authorised the US Treasury to mint platinum coins in whatever denomination it chooses - even $1,000,000,000,000! Of course the law was originally intended to apply to smaller denomination commemorative coins for collectors. Finally rejected by the Federal Reserve and the Treasury, collectors worldwide have been seeking to own their very own trial pattern of the coin that almostbecame the world's highest denomination coin, and whilst we can't guarantee it will ever be worth a trillion dollars it is layered with pure platinum!

Luxuriously plated in platinum, this exquisite "Proof" coin features a representation of what the $1 trillion coin would look like if Congress were to issue it to reduce the deficit.