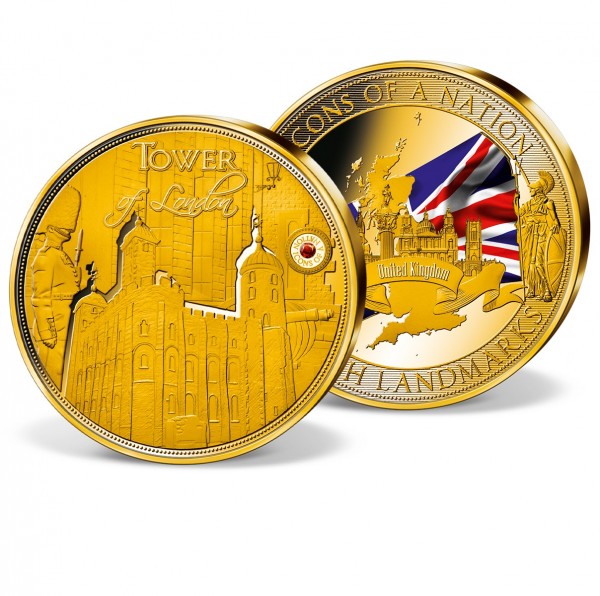 Description
Description
The Tower of London is one of England's most famous historical landmarks. This iconic castle has... more
Close menu
'Tower of London' Ultra-large Commemorative Strike

The Tower of London is one of England's most famous historical landmarks. This iconic castle has a rich and fascinating history that dates back over 950 years.

The Tower of London is a complex of several buildings situated on the north bank of the River Thames, in central London. William the Conqueror founded the tower as a military stronghold towards the end of 1066, as part of the Norman Conquest of England.

The Tower of London has served as a royal residence, a zoo, an armoury and a state prison. During the Tudor and Stuart period, the Tower held some very famous prisoners, including Lady Jane Grey, Anne Boleyn, Sir Walter Raleigh, Sir Thomas More and Guy Fawkes. Later, several spies accused of espionage and high-profile prisoners of war were held in the Tower during the First and Second World Wars, including Rudolf Hess, Hitler's deputy.

22 executions took place within the Tower of London, and the Tower is now believed to be one of England's most haunted buildings. There are many stories of ghosts haunting the Tower, including Anne Boleyn, who is said to walk the site of her execution on Tower Green, and a mysterious 'White Lady' who haunts the Castle Keep.

Today, the Tower of London is the protector of the Crown Jewels. There are over 23,500 gemstones in the Jewel House at the Tower, thought to be worth over £20 billion. The Crown Jewels are heavily guarded and have become one of the Tower's most popular attractions.

Now the iconic Tower of London has been commemorated with a giant strike, preciously layered with 24-carat gold and finished with sought-after colour detailing. Masterfully engraved in exquisite detail and hand-set with a genuine SWAROVSKI® ELEMENT, this stunning XXXL strike is a tribute to one of the most famous landmarks in Great Britain.