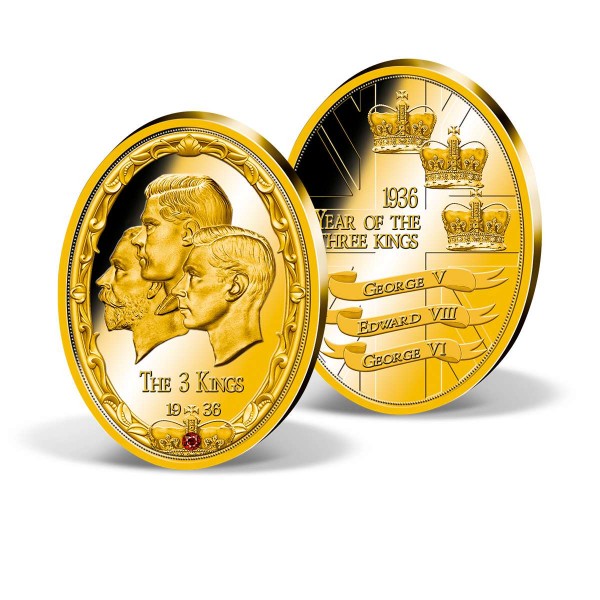 Description
Description
1936 was a history-changing in Great Britain. King George V died on January 20th and was... more
Close menu
The 'Year of the Three Kings' Supersize Commemorative Strike

1936 was a history-changing in Great Britain. King George V died on January 20th and was succeeded by his eldest son Edward VIII. Ever popular as a prince, Edward was, however, in love with the American divorcee, Wallis Simpson, and was forced to choose between duty and love. Edward famously chose the latter and voluntarily abdicated 325 days into his reign.

Edward's abdication was announced on December 11th. His younger brother, the Duke of York, affectionately known as 'Bertie' had not expected to inherit the throne. A shy man, struggling to overcome a speech impediment, he was unprepared, but warmly received and proclaimed King George VI on 12th December.

George VI went on to become one of Britain's best-loved rulers leading the nation through World War II with his queen, Queen Elizabeth, later affectionately known as 'The Queen Mother'. Without the events of 1936 Britain's history could have been very different indeed - and Queen Eliyabeth II today would not be our beloved Queen, but just a cousin of the reigning monarch.

The three portraits on the obverse of this commemorative strike are shownfacing left. It is tradition that the effigy of each British monarch always faces in the opposite direction of his or her predecessor. However, unconventionally, Edward VIII broke with centuries of tradition as he believed his left side to be superior to his right and insisted on his image facing left, as his father's, George V's effigy had.

No British coins bearing the portrait ofEdward VIII were ever officially issued. So when George VI acceded to the throne, his image was also placed to face left, implying that, had any coins been minted with Edward's portrait theobverses would have depicted Edward facing right and thus the centuries' old tradition maintained.