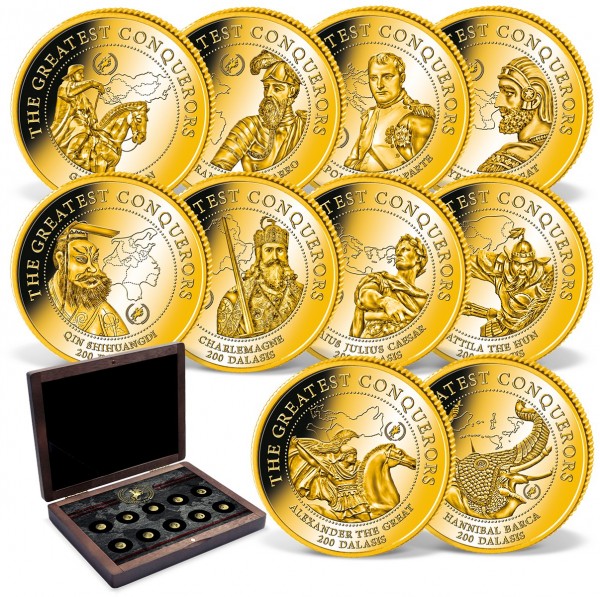 Throughout history, great conquerors have shaped the world and created empires so large, that they almost took over the whole world. Even though they could not have been more different in appearance and background, they shared their brilliant military minds, their huge ambitions and their strategic thinking. Many of their warfare strategies are still taught at military schools all over the world and are proof of their influence on our history and warfare.

This set commemorates the most impressive and successful warriors and rulers, who once reigned over enourmous empires and haveshaped the world that we know today - the 'World's Greatest Conquerors'. For example, Alexander the Great created one of the largest empires of the Ancient World by the age of only thirty. He was never defeated in battle and not only conquered over 2 million square feet of land, but also created the biggest library of all time. Or Julius Caesar, who rose to power becoming dictator of Rome and expanded the Roman Empire, also invading Britain and crossing the Thames. Genghis Khan was the founder of the world's largest empire and in his time conquered more land than any other conqueror, taking over most of Asia and, as the only one in history, successfully invading Russia.

Now, the 10 greatest conquerors have been remembered with official gold coins, minted in solid gold. All ten original coins are minted in finest gold as official currency in the issuing country.

Your gold coins come in an elegant protective coin case for safe storage of your precious gold coins,, including a booklet with information about each individual coin issue.