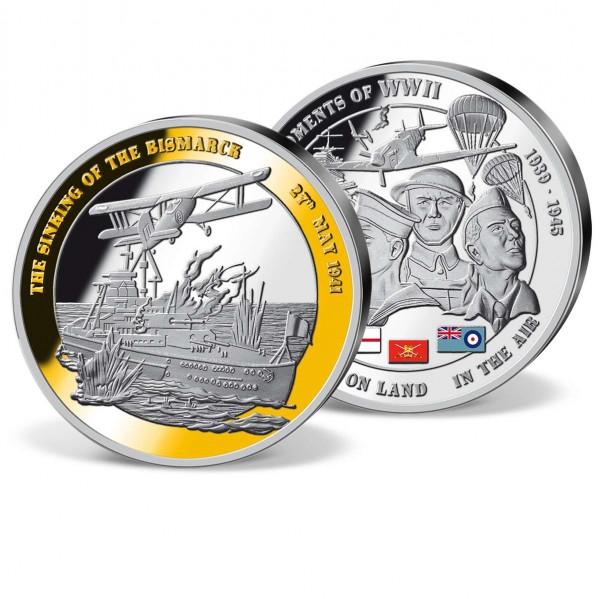 Description
Description
on 24th May 1941, Churchill issued the command 'The Bismarck must be sunk at all costs'. His... more
Close menu
'The Sinking of the Bismarck 1941' Commemorative Strike

on 24th May 1941, Churchill issued the command 'The Bismarck must be sunk at all costs'. His order came after what was without a doubt the most famous Naval surface action of World War II - The Battle of the Denmark Strait.

The battlecruiser HMS Hood, the flagship of the Home Fleet and pride of the Royal Navy had been lost within minutes in its confrontation with the German Navy, KMS Bismarck. In retaliation, the Royal Navy sent every possible unit in a a relentless pursuit to find and sink the Bismarck. Two days later, Fairey Swordfish bombers from the Fleet Air Arm torpedoed the 'invincible Bismarck' jamming her rudder. The crippled giant could only steam in a circle and was finished off by a formidable Royal Navy force led by battleships King George V and Rodney. After a long fighting chase three torpedoes were launched by cruiser Dorsetshire and at 10:40 am 27 May, 1941 the Bismarck sank, hitting the bottom of the sea floor with it guns still blazing.

The chase and climactic battle to sink the Bismarck ushered in a new era of naval warfare and was one of the early turning points in World War II. Beautifully crafted and accented in 24-carat gold this commemorative coin has been issued to mark the anniversary of the sinking of Bismarck almost 80 years ago. Strictly limited to only 9,999 complete editionsworldwide it is unique reminder of one of the defining moments in the history of the Second World War.