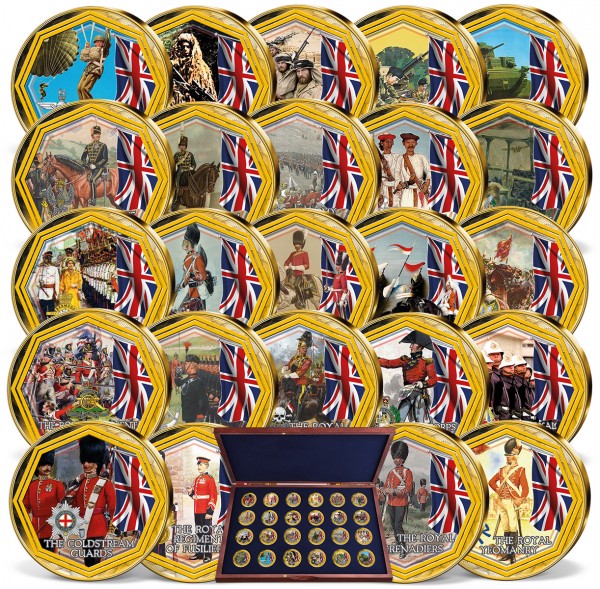 The British Army serves and protects our nation!

In 1645, Oliver Cromwell established his New Model Army - the first well trained and disciplined English standing army. It was disbanded by Charles II in 1660, however, the King used the design of the New Model Army to create his own professional force. In 1661, Charles II issued a Royal Warrant to create the first regiments of the British Army. Each regiment has its own place within the British Army hierarchy, as well as its own traditions, coat of arms, uniform and insignia. The Grenadier Guards and the Household Cavalry are two of the oldest and most iconic regiments in the British Army. They are renowned for their dual role: to serve with great distinction on the front line, specialising in Light Role Infantry operations, and they are famous for their ceremonial duties and guarding the Royal Palaces. Up to the beginning of WWII, the Household Cavalry acted as a heavy cavalry unit.

Today, they serve as an armoured reconnaissance regiment, and carry out ceremonial duties. Another legendary regiment is the Brigade of Gurkhas: the famous Nepalese Gurkha soldiers are an integral part of the British Army and have loyally served the British Crown for over 200 years. The Parachute Regiment, known as 'The Paras', is Britain's elite airborne infantry. Their training has been described as the toughest in theworld. The Special Air Service (SAS) is Britain's famous special forces unit. These highly trained elite soldiers are known for their covert surveillance and close-combat fighting. Britain's largestinfantry regiment is The Rifles: since its foundation 2007, Riflemen have been at the forefront of overseas operations and have played a key role in all major military campaigns.

This stunning collector's edition has been issued in tribute to Britain's most iconic regiments.