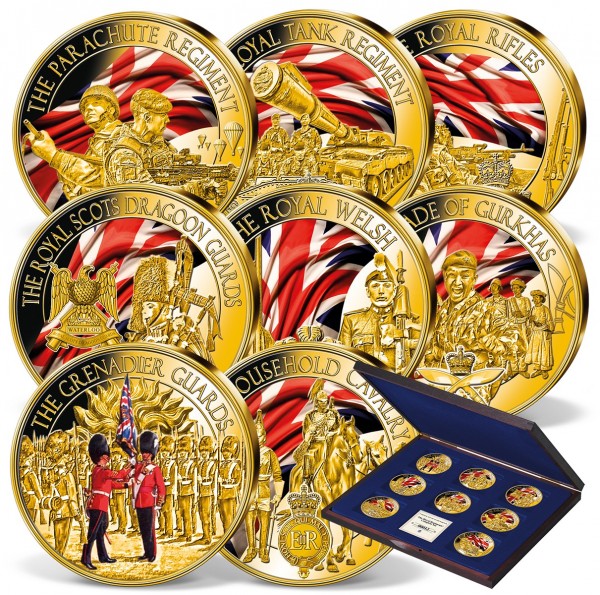 The 'Royal Regiments' complete set of finest 'proof' strikes, preciously layered with pure 24-carat gold and finished with stunning colour detailing, is a special tribute to our most iconic regiments.

The Grenadier Guards and The Household Cavalry are two of the oldest and most iconic regiments in the British Army. The Grenadier Guards serve with great distinction on the front line, specialising in Light Role Infantry operations, and carry out ceremonial duties in London and at Windsor Castle, guarding the Royal Palaces.

Up to the beginning of WWII, the Household Cavalry acted as a heavy cavalry unit. Today, they serve as an armoured reconnaissance regiment, and carry out ceremonial duties.

The Brigade of Gurkhas has loyally served the British Crown for over 200 years. They were recruited into the East India Company and when India became independent from the UK, the Gurkha regiments were split between Britain and India. Sincethen, they have loyally fought for the British Army all over the world.

The Parachute Regiment, known as 'The Paras', is Britain's elite airborne infantry. Their physical fitness, field craft and skill at arms earned them a reputation for being one of the toughest regiments in the British Army.

Another regiment named 'The Rifles' are Britain's largest infantry regiment. They have been constantly engaged successfully in different operations, and continue to play a key role in all major military campaigns.

Famous for their iconic victory at the Battle of Waterloo is Scotland's light cavalry regiment, The Royal Scots Dragoon Guards. They have served in several campaigns and now operate in an armoured reconnaissance role, exploring natural features and other activities in territories of conflict.

The Royal Tank Regiment was created after the introduction of tanks in the Battle of the Somme during WWI, and is the oldest tank unit in the world.

The last regiment in this set, is The Royal Welsh which draws its recruits primarily from Wales. They are also the Army's most experienced armoured infantry unit, and a key part of the UK's only warfighting division.

This Windsor Mint exclusive of eight gold-layered strikes in an elegant display case is a hugely popular limited-edition set, with each regiment portrayed in intricate detail - it's no wonder it's a favourite amongst our collectors.