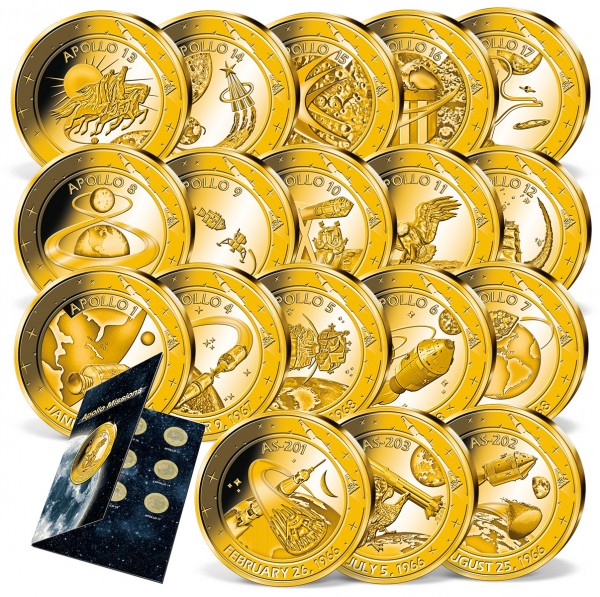 'That's one small step for a man. One giant leap for mankind'
Neil Armstrong

when Neil Armstrong 50 years ago, on July, 21st 1969, made mankind's first step on the moon, world was changed forever.

A challenging and ambitious project, requested by U.S. President John F. Kennedy, went down in history as a giant leap for mankind. Until today, a total of twelve men have stepped onto the moon - the first ones were Neil Armstrong and Buzz Aldrin on Apollo 11, and the last ones were Gene Cernan and Jack Schmitt on Apollo 17 in 1972. Many dramatic moments and successes, watched by millions of people worldwide on their TVs, pave the way to the first landing on the moon ...

Now, the Apollo Project has been honoured with a set of eighteen precious strikes,each one remembering one launch of Apollo spacecraft :
AS-201 - the first unmanned test flight
AS-203 - the first step into the orbit
AS-202 - later than expected - th last preparations
Apollo 1 - a tragic first crewed mission
Apollo 4 - recovering from the first spaceflight disaster
Apollo 5 - 'Fire in the hole'
Apollo 6 - NASA's last unmanned test flight
Apollo 7 - the first crewed spaceflight
Apollo 8 - the dark side of the moon
Apollo 9 - the first test of the lunar module
Apollo 10 - the last rehearsal before the landing
Apollo11 - the Eagle has landed
Apollo 12 - the flight to the 'Ocean of Storms
Apollo 13 - NASA's near-disaster
Apollo 14 - the most successfull mission for science
Apollo 15 - the debut of the moon buggy
Apollo 16 - first astronimic films with a UV-camera
Apollo 17 - the last mission