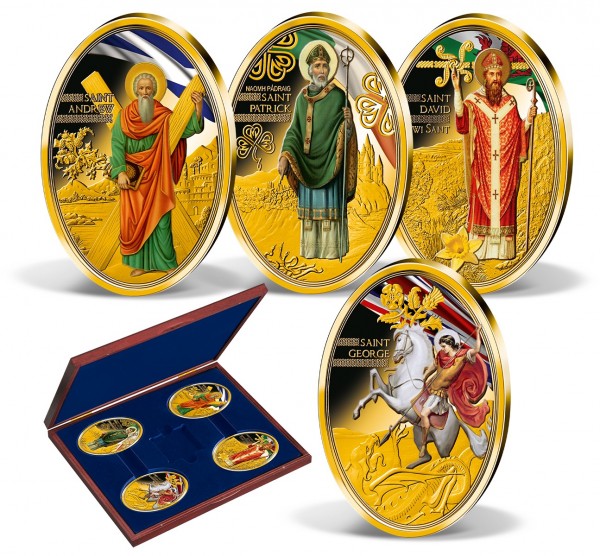 The Patron Saints of England, Wales, Scotland and Ireland have been commemorated in one beautiful collection of four stunning oval supersize strikes.

St George Patron Saint of England
St George, England's legendary patron saint, lived in the late 3rd century, in what is now modern-day Turkey. During the Middle Ages, he became the personification of bravery and selflessness. George was a Christian officer in the Roman army, when Emperor Diocletian had him tortured to try to make him deny his faith, George showed incredible courage and died a martyr. The Golden Legend from 1265, by Jacob de Voragine, tells the story of George rescuing the daughter of a Libyan king from a dragon, and then slaying the beast, in return for a promise that the king's people would be baptised. The story is one of Britain's most famous legends. In 1327, King Edward III made George the patron saint of England, when he made him the patron of the newly founded Most Noble Order of the Garter.

St David Patron Saint of Wales
St David, or Dewi Sant in Welsh, is the patron saint of Wales. Descended from Welsh royalty, David was born the son of Sandde, Prince of Powys, and Non, the daughter of a chieftain of Menevia, which is now the cathedral town of St Davids. David became a renowned preacher and performed several miracles during his lifetime. His advice to Welsh soldiers to wear leeks in their hats to make them distinguishable from their enemies, made the leek one of the national symbols of Wales. David is said to have lived for more than 100 years, and died on 1st March 589. In 1120, Pope Callactus II canonised David as a Saint, and he was made the patron saint of Wales. The pope proclaimed that two pilgrimages to St Davids equalled one to the Vatican in Rome.

St Andrew Patron Saint of Scotland
Since 2006, St Andrew's Day on 30th November is an official bank holiday in Scotland. The day celebrates the Feast of St Andrew, who has been revered in Scotland for over 1,000 years. Andrew was one of the original 12 disciples of Jesus Christ, and was also the brother of Simon Peter. They both lived and worked as fishermen near the Sea of Galilee. According to legend, Andrew died a martyr after being killed by the Romans in Patras, in Greece. Believing himself not worthy to die on the same shape cross as Jesus Christ, he asked to be crucified on an X-shaped cross, which later became known as St Andrew's cross, the Saltire. His white cross on a blue background was adopted as the Scottish flag and forms a central component of the Union Jack.

St Patrick Patron Saint of Ireland
St Patrick is the patron saint and national apostle of Ireland, and is credited with bringing Christianity to Ireland. He is said to have lived in the second half of the 4th century and went on to become one of the world's most popular saints. St Patrick's Day on 17th March is celebrated by Irish people all over the world. Born in Roman Britain, Patrick was captured by Irish pirates at the age of 16, and was taken to Ireland as a slave to herd and tend sheep. He escaped six years later and travelled back to Britain, but when he had a vision with 'The Voiceof the Irish', he travelled back to preach the Gospel throughout Ireland, and tirelessly converted many thousands to Christianity. Legend says St Patrick drove the snakes of Ireland into the sea to destroy them.