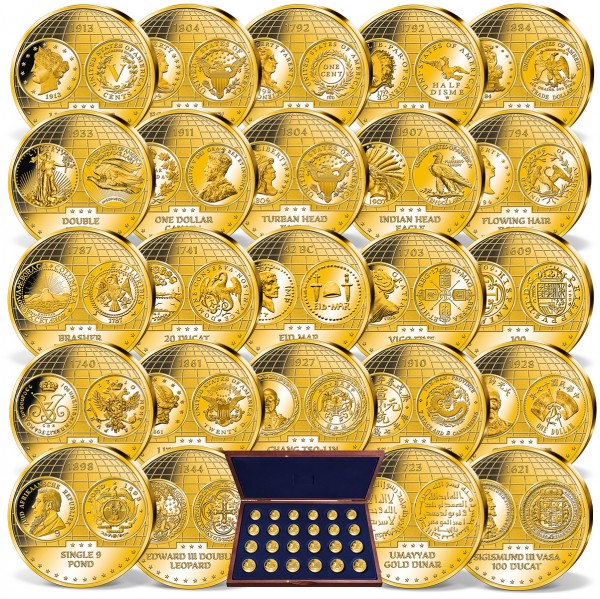 This product is currently not available.
Please inform me as soon as the product is available again.
Amount due: £839.00

Description
Description
Rare coins are achieving higher prices at auctions than ever before, and some numismatic experts... more
Close menu
The 'Most expensive coins in the world' Commemorative Strike Set

Rare coins are achieving higher prices at auctions than ever before, and some numismatic experts believe the upper limit has not yet been reached. The most expensive coins in the world are still increasing in value - as they are also the rarest coins in the world. One of the reasons for this is that previously some countries made private ownership of gold hoards illegal. Consequently, some people resorted to hiding their gold coins and unfortunately many coins were never found again. Numerous coins have been lost in the turmoil of history, with many melted down to provide gold and silver intimes of financial crisis. Some coins are so rare that only a few copies are known to exist. These have become the most valuable coins in the world and are the coins that rich collectors and museumsbid millions for.

The famous Saint-Gaudens 1933 Double Eagle holds the title of being the most valuable coin in the world. In June 2021, the only copy ever allowed to be privately owned wassold at auction for a record $18,872,250 (£13.4 million). The auction at Sotheby's in New York City was a historic event in coin collecting, as the coin sold for a record-setting price that eclipsed all previous records.

Including the highly sought-after 1794 'Flowing Hair Dollar' which sold at auction in 2013 for just over $10 million.

Another expensive coin is the Brasher Doubloon, which was struck by a neighbour of George Washington. In 2011, a Brasher Doubloon sold at auction for nearly $7.4 million.

The 1344 Edward III Double Leopard is extremely rare, only three coins are known to have survived and they're estimated to be worth around $6.8 million each.

Now, this stunning collection celebrating these legendary coins has been issued, at a much more affordable price. This exclusive collector's edition is an impressive tribute to the most expensive coins in the world.