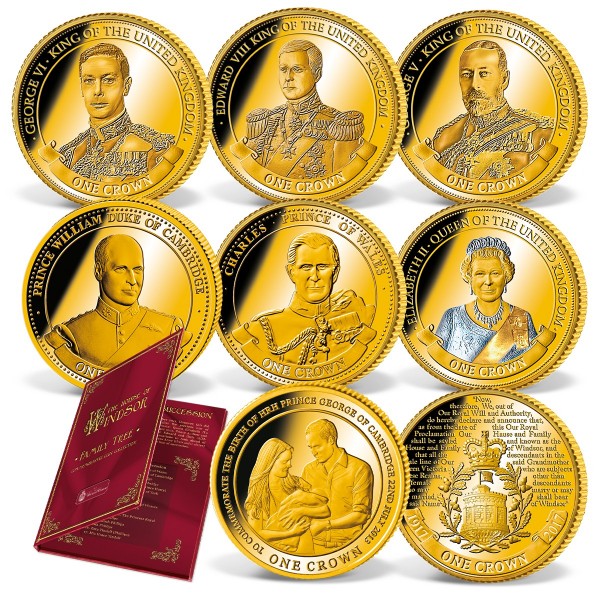 In 2017, the House of Windsor celebrated its 100th anniversary - a proud century of successful reign. It was founded in 1917, by royal proclamation, when King George V changed the British Royal Family's official name from Saxe-Coburg-Gotha to Windsor, cutting himself off from the network of European relations from whom his family had sprung.

The Royal House of Windsor has reigned over our country since 1917, providing stability in a fast changing environment. Great Britain and the Allies gained victory in the First and the Second World War and the century saw the modernisation ofthe monarchy with many social changes, such as the use of mass communication technologies, making the Royal Family accessible to a broader public all over the world./

Queen Elizabeth II, thehead of the House of Windsor, is now the world's oldest and longest reigning monarch and with the birth of her young great-grandson Prince George in 2013, a direct line of succession has been securedinto the third generation.

The Proclamation of the House of Windsor

During the first world war, high anti-German sentiments amongst the British people reached a peak in 2017, when the Gotha G IV, a heavy aircraft capable of crossing the English Channel, bombed London. King George V abandoned all titles held under the German Crown and proclaimed a change of name from Saxe-Cobburg and Gotha to Windsor. The name had a long tradition in British monarchy, through the town of Windsor, Berkshire and Windsor Castle, whose Round Tower became the basis of the badge of the House of Windsor.

George V
Born in 1865 during the reign of his grandmother Queen Victoria, George served in the Royal Navy from 1877 to 1891. The unexpected death of his elder brother Prince Albert Victor in early 1892 put him directly in line for the throne and he became king-emperor on his father's death in 1910. George V's reign saw the rise of socialism, communism, fascism,Irish republicanism, and the Indian independence movement, all of which radically changed the political landscape. Whilst the First World War (1914-1918) destroyed the empires of his first cousins Nicholas II of Russia and Wilhelm II of Germany, the British Empire expanded to its greatest effective extent. In 1917, George renamed the House of Saxe-Coburg and Gotha to the House of Windsor as a result of anti-German public sentiment.

Edward VIII
Over 80 years ago, on 20th January 1936 after the death of his father George V, Edward VIII became king. Within weeks of his accession coinage patterns were being prepared for Edward's approval, so as to be ready for production for his coronation in 1937. Choosing love above duty Edward voluntarily abdicated 325 days into his reign, on 10th December. On the announcement of his abdication all work on creating his coinage ceased. No coins bearing the image of Edward VIII were ever issued for circulation in the United Kingdom,therefore this official British territory Gibtaltar-issued coin is especially sought after by collectors.

George VI
George VI became King unexpectedly following the abdication of his brother, King Edward VIII, in December 1936. Shy by nature, but hard-working and dedicated, he became very popular during the Second World War, when he and his wife, Queen Elizabeth, remained atBuckingham Palace and visited severely bombed areas in the London and elsewhere in the country. On Victory in Europe Day in May 1945, Buckingham Palace, where the king entertained a close working relationship with Prime minister Winston Churchill, was the centre of he celebrations. By 1948 Britain had overcome the worst hardships of the post-war years, but the strain of the Second World War andthe post-war period had taken their toll on the King's health. George VI died on 6 February 1952 aged 56 after a lung operation and was succeeded by his daughter, Elizabeth II.

ElizabethII
Queen Elizabeth II is the longest reigning monarch in British history and became a much loved and respected figure all over the world. Admired for her sense of duty and her devotion to a life of service to our country, she has given us stability in ever changing times and been an important figurehead for the UK and the Commonwealth through social and political challenges. At the age of93 this year, she continues to carry out a full program of engagements, supported by her successors and her family. From a young girl, who did not expect to be Queen, she has become an iconic and celebrated figure who is now the world's oldest and longest reigning monarch.

Charles Prince of Wales
Born at Buckingham Palace on 14 November 1948 Prince Charles Philip Arthur George was the first son of Princess Elizabeth and The Duke of Edinburgh. The Queen declared her eldest son and heir apparent Prince of Wales in 1958 and in 1969 his Investiture took place at Caernarfon Castle. On 29 July 1981, The Prince of Wales married Lady Diana Spencer in St Paul's Cathedral, and they had two sons: Prince William, born on 21 June 1982; and Prince Harry, born on 15 September 1984.The marriage was dissolved in 1996 and Diana died prematurely in a car crash in 1997. Heir to the Throne, The Prince of Wales undertakes, together with his new wife, the Duchess of Cornwall, officialRoyal duties in support of Her Majesty The Queen, supports social and environmental charitable and civil causes to make a positive difference in the UK and internationally and promotes British traditions, virtues and excellence.

William Duke of Cambridge
Current the second in line to the throne after his father, the Prince of Wales, Prince William is married to The Duchess of Cambridge, Catherine, with whom he has three children: Prince George, Princess Charlotte and Prince Louis. From his official residence is Kensington Palace he undertakes a number of charitable activities and projects and carries out public and official duties in support of The Queen, in the UK and overseas.

George of Cambridge
Born on the 22nd July 2013 at St Mary's Hospital in Paddington, London, George Alexander Louis of Cambridge is third in line to the throne and the third generation of kings after Queen Elizabeth II. The news of his birth was celebrated the world over and he was christened in October 2013 by the Archbishop of Canterbury. He has since accompanied his parents on official tours to New Zealand and Australia, Canada, Poland and Germany. He became abrother of his younger siblings Charlotte and Louis and started school in 2017.