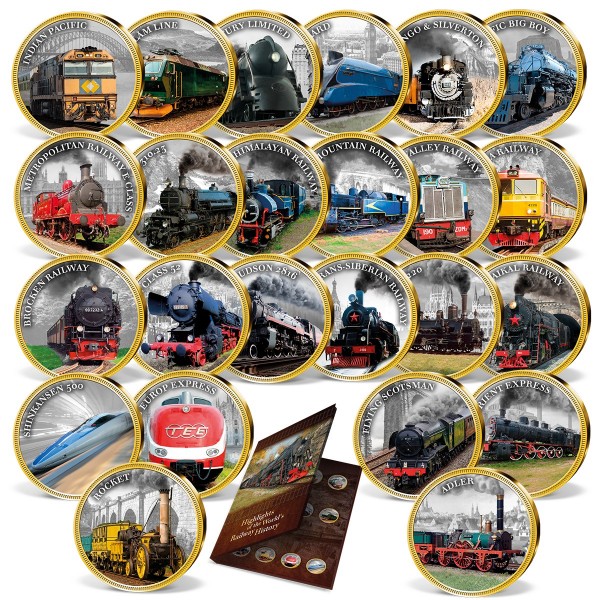 Description
Description
England is known as the birthplace of the railway - with the invention of the steam engine in... more
Close menu
'The History of the Railway' Complete Set

England is known as the birthplace of the railway - with the invention of the steam engine in the 18th century.

Following the success of the Stockton and Darlington Railway, George Stephenson and his son, Robert Stephenson, designed and built the 'Rocket' steam locomotive. The 'Rocket' was the clear winner of the Rainhill Trials, held in 1829 to decide on the best transport for the railway. It was a major step forward in the history of rail transport.

The Adler was the first commercial steam locomotive to transport passengers and goods in Germany. It was designed and created by George and Robert Stephenson, for the Bavarian Ludwig Railway. The locomotive was shipped over in pieces and assembled in the engineering workshops of Johann Wilhelm Spaeth. On 7th December 1835, the Adler completed its maiden journeyfrom Fürth to Nuremberg. To celebrate the centenary of the railways in Germany in 1935, a serviceable replica was built - the 'Adler 1935'.

Now the history of the railway has been commemorated in one complete set of 24 strikes, preciously layered with 24-carat gold and with stunning colour detailing. The collection features highlights such as the Rocket, the Adler, the Flying Scotsman, the Orient Express and the Mallard. This exclusive edition comes in a beautiful display folder and is strictly limited to only 9,999 complete sets worldwide.