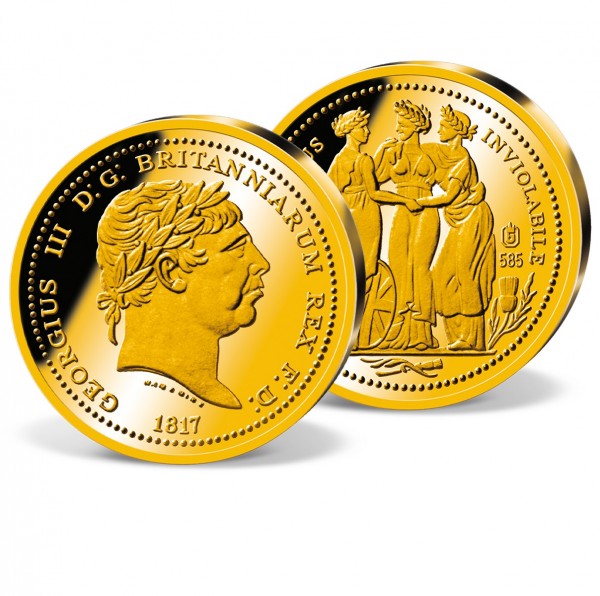 200 years ago, Britain mourned the death of George III, the first King of the United Kingdom of Great Britain and Ireland, which were unified during his reign in 1801. In celebration of this historic moment, the famous medalist and later chief engraver of the Royal Mint, William Wyon, created a beautiful gold coin named the 'Three Graces', inspired by Antonio Canova's legendary marble statue. The obverse depicted George III and the reverse featured the three graces representing Ireland (with her attribute, the harp), Britain (with the Union shield) and Scotland (with a thistle).

The 'Three Graces' Pattern Crown was issued to celebrate the Act of Union of 1801, establishing the United Kingdom of Great Britain and Ireland and making George III the Union's first king. These pattern crowns were not intended for circulation and only three gold specimens were struck - a perfect example of exceptional beauty combined with extreme scarcity of mintage. The dies were painstakingly prepared, giving the matte finish of the motifs a brilliantly shiny background. Such rare pieces are normally out of reach for collectors and can only be seen in museums.

Although these original masterpieces will never be accessible to most collectors, a beautiful museum-quality replica in solid gold is now available, in a strictly limited mintage.