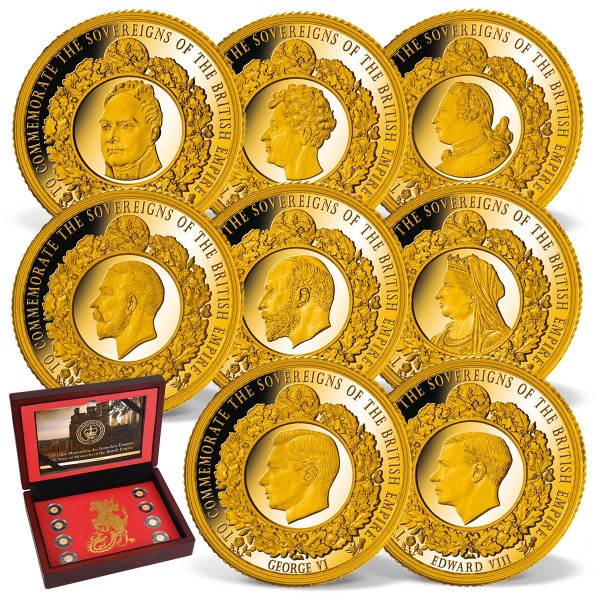 This product is currently not available.
Please inform me as soon as the product is available again.
Amount due: £1,450.00

Description
Description
For many centuries, the British gold sovereign has been the standard gold currency of the... more
Close menu
'The British Empire' Complete Gold Set

For many centuries, the British gold sovereign has been the standard gold currency of the British Empire and is actually one of the oldest gold coins The sovereigns relaunched in 1817 were almosthalf the weight and diameter of the original gold sovereign. As all sovereigns, there was no face value on the coin.

The obverse of the sovereigns always feature the reigning monarch, and the reverse depicts St George, the English national saint and legendary dragon slayer. With a face value of 1 pound sterling, the sovereign was first minted in 1489 by Henry VIII, who asked the Royal Mint to produce a 'new money of gold'. It was the largest and most prestigious coin of its time. The classic denominations were 1 Sovereign (1 Pound Sterling) and 1/2 Sovereign (1/2 Pound Sterling). Inthe 17th and 18th century, the gold sovereign was partly replaced by other gold coins and returned in 1817 as the most traditional gold coin of the British Empire.

In celebration the 200th anniversary of the first issue of the modern sovereign, the government of the Commonwealth member Niue Islands has issued a strictly limited anniversary edition dedicated to the 'British Empire'. This prestigious setincludes eight official gold dollars in finest solid gold (999/1000), featuring some of the most influential monarchs of the British Empire, amongst them Queen Victoria. 2019 marks her 200th birthday,and her reign from 1837 to 1901 as Queen of the United Kingdom of Great Britain and Ireland and (from 1876) Empress of India was a time when Britain saw extraordinary prosperity and the heydays of the British Empire. Therefore the 'Victorian' era was also called the 'Golden Era' of the British Empire. Queen Victoria's nine children and 26 of her grandchildren married into royal and noble familiesall over the continent and made Queen Victoria the 'Grandmother of Europe'.