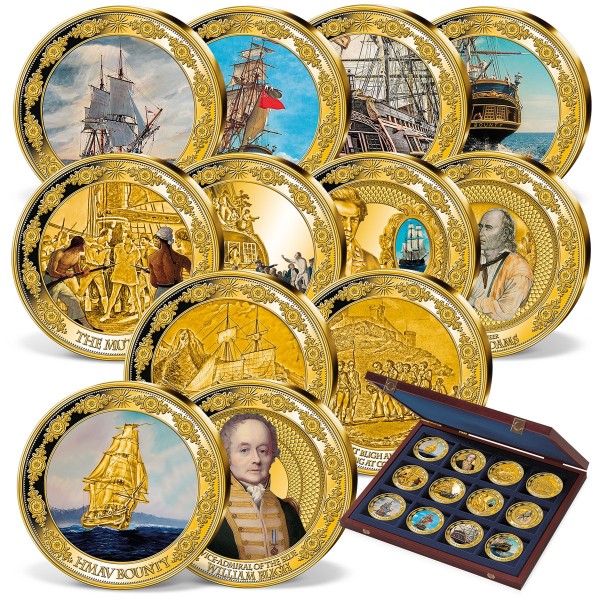 Description
Description
The 'Bounty' - the legendary ship of the mutineers. This stunning set of 12 strikes, minted in... more
Close menu
The 'Bounty' Commemorative Strike Set

The 'Bounty' - the legendary ship of the mutineers. This stunning set of 12 strikes, minted in the highest quality 'PROOF' and preciously layered with 24-carat gold, charts the infamousmutiny on the Bounty.

In 1787, the HMS Bounty left England, under orders of the British government, to collect breadfruit plants from Tahiti and transport them to the West Indies. Thecrew enjoyed a five-month stay on Tahiti, which seemed like paradise after the harsh conditions on-board the ship, and they were reluctant to leave.

During the onward journey, the crew began to revolt against their Captain and his brutal punishments. On 28th April 1789, the HMS Bounty was seized in a mutiny, led by master's mate Fletcher Christian.

Captain Bligh and 18 of his loyal crewmembers were forced into a small boat and set adrift in the Pacific. After a remarkable six-week voyage of over 3,600 miles without nautical charts, Bligh and his men reached Timor in the East Indies.

Once recovered, Bligh and his crew returned to England and reported the mutiny. Meanwhile, the mutineers had returned to Tahiti, but after much infighting some, including Fletcher Christian, set sail on the Bounty to find a safe haven and reached the remote Pitcairn Island, where they formed a small colony.

Those that stayed in Tahiti werecaptured by the Royal Navy and punished for their crime. It is believed that Fletcher Christian and most of the other mutineers were killed on Pitcairn Island during a conflict with their Tahitian companions.

Now available as a sensational complete set: the adventurous story of the Bounty is strictly limited to only 1,787 sets worldwide, making it is a much sought-after Windsor Mintexclusive.