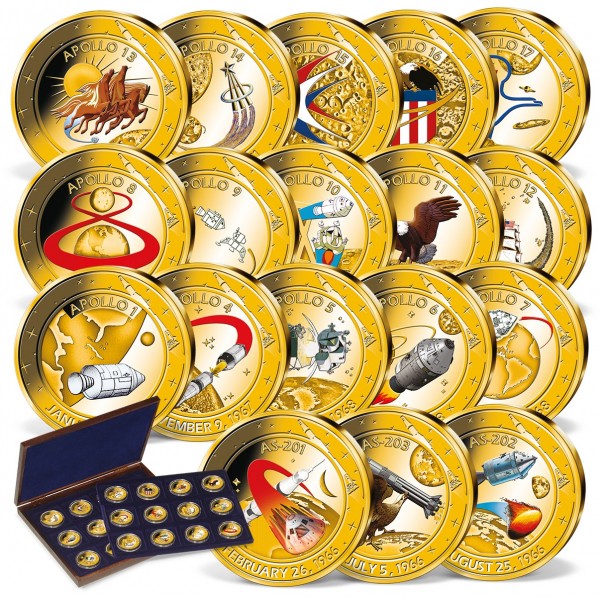 Description
Description
Do you still remember THE event of the 20th century? Between 1961 and 1972, the United... more
Close menu
'The Apollo Missions' Complete Set

Do you still remember THE event of the 20th century?

Between 1961 and 1972, the United States of America set new standards in space technology with the legendary Project Apollo space exploration program. The highlight was the Apollo 11 Mission: on 16th July 1969, with the world watching, Apollo 11 took off from Kennedy Space Center with astronauts Neil Armstrong, Edwin 'Buzz' Aldrin and Michael Collins aboard. After traveling 240,000 miles in 76 hours, Apollo 11 entered into lunar orbit on 19th July. The next day, the Lunar Module 'Eagle', manned by Armstrong and Aldrin, separated from the Command Module, where Collins remained, and began its descent to the lunar surface, touching down on the southwestern edge of the Sea of Tranquility. Armstrong immediately radioed to Mission Control in Houston, "The Eagle has landed." On 20th July 1969, Neil Armstrong became the first person to ever walk on the Moon. As he took his first step, Armstrong famously said, "That's one small step for a man, one giant leap for mankind."

"Houston, we've had a problem" - this famous SOS message was received by NASA's Mission Control during the Apollo 13 Mission, half a century ago. Apollo 13 was supposed to be the third mission to land on the Moon, but on 11th April 1970, whilst en route to the Moon, one of the two oxygen tanks exploded - suddenly a mission of lunar exploration became a mission of survival. Ground control in Houston scrambled to develop an emergency plan, as millions around the world watched and feared for the lives of the three astronauts; James A. Lovell Jr., Fred W. Haise Jr. and John L. Swigert. NASA later described this mission as a 'successful failure', as thankfully the crew of Apollo 13 returned safely back to Earth despite the catastrophe - it was an extraordinary story of human survival.

'The Apollo Missions' complete set commemorates all the different 18 Apollo Project missions that led to the exploration of the Moon. This exclusive collector's edition of 18 stunning strikes, preciously layered with finest gold, celebrates one of the most successful space expeditions ever. 'The Apollo Missions' complete set comes in an elegant display case and is strictly limited to just 1,967 complete collections.