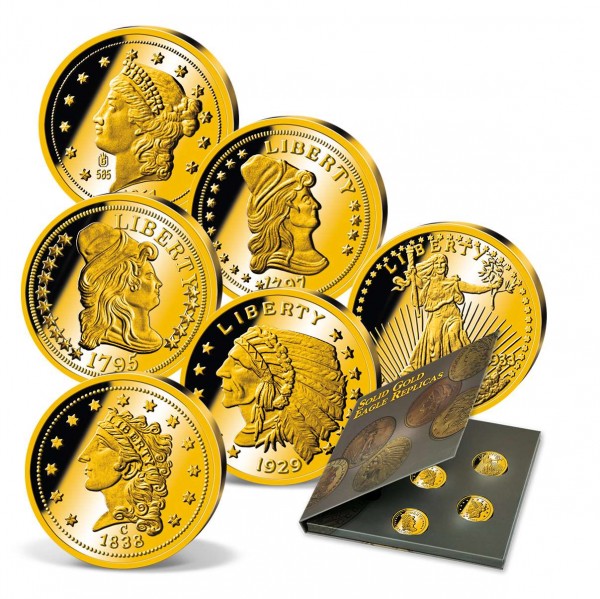 One of today's most famous gold dollar coins is the American Gold Eagle with the legendary heraldic Bald Eagle of the USA. They were minted by the U.S. Mint from 1795 to 1933, as official circulating currency. Nearly 500,000 gold coins became victim of the world economic crisis: due to the threat of deflation, all the gold that could be found was seized and melted down to bullion bars, including the newly minted gold Double Eagles.

Just 20 of the original Double Eagle coins are known to have survived and disappeared in mysterious circumstances. It is believed thatone of the minting officials took them out of the mint before they could be melted down. In 1944, the U.S. Secret Service managed to locate nine of the stolen gold coins, which were subsequentlydestroyed. One of the last gold 1933 Double Eagles was acquired by King Farouk of Egypt, and mistakenly, just days before the mint theft was discovered, an export license was granted. In 1996, a Double Eagle coin surfaced again after over forty years of obscurity, when British coin dealer Stephen Fenton was arrested by U.S. Secret Service agents. The case was settled in 2001 when it was agreed that ownership of the Double Eagle would revert to the U.S. government. The Double Eagle was legally sold in 2002 to an anonymous bidder at a Sotheby's auction in New York, for a sensational $7.59 million, a record amount at the time.

The original $20 gold Double Eagle with the Liberty Head motif was designed by Longacre and minted from 1861 until 1865, during the times of the American Civil War, which has made them especially desirable for collectors. There were two reverse designs produced that year, the second being the Paquet Double Eagle, of which there are only two known surviving1861 Paquet Double Eagles, one of which sold in 1988 for $6.6 million.

In 1834, the Classic Head Quarter Eagle with the nominal value of $2.5 was redesigned: the face of Lady Liberty is softer with a less rigid and heroic expression. Her thick curly hair is confined in a hairband that features the inscription 'Liberty'. A circle of 13 stars surround Liberty's head and the letters 'E PLURIBUS UNUM' were omitted. The Classic Head was designed by Engraver William Kneass and used until 1839.

The $5 gold coins of the 'Indian Head' series were issued from 1908 to 1916 whenproduction was suspended for 13 years. Due to its popularity, this gold coin experienced a brief 'comeback' in 1929, which was ended by the American Wall-Street crash, the 'Black Thursday' of thefinancial markets in the same year.

The gold Turban Head Eagle, also known as the Capped Bust Eagle, was struck by the U.S Mint from 1795 to 1804. Its name is a misnomer as Liberty is not actually wearing a turban but in fact a cap, believed to be a Phrygian (Liberty cap), with her hair twisted around the cap resembling a turban. It was designed by Robert Scot and features a small Eagleon the reverse. The Turban Head was minted and circulated with face values of $2.5, $5, $10 and $20. From 1807, the mintage of $10 gold Eagle coins was completely stopped for 34 years. The Turban Head with profile to the right, featured only a small eagle on the reverse. However, between 1795 and 1798 a second version was circulated, featuring a much larger Bald Eagle as a heraldic symbol on thereverse. From 1798 onwards the national symbol has remained larger. The Bald Eagle has been the heraldic symbol of the USA since 1782 and has been publicly used ever since.