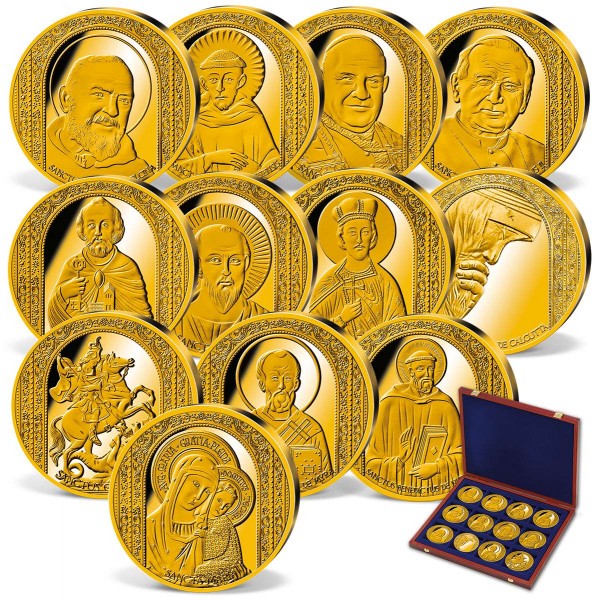 Amongst the many canonised (sainted) and beatified (blessed); Peter, Paul, Nicholas, George and Francis of Assisi have long been some of the most popular traditional saints of the Catholic Church.

Today a few outstanding Christians are also canonised, the last example being Pope John Paul II, who was beatified by Pope Benedict XVI on 1st May 2011, and after a sensationally short period, canonised on 27th April 2014. He was made a saint after the Catholic Church attributed two miracles to him - the recovery of a French nun from Parkinson's disease, and the healing of a woman from Costa Rica from an inoperable brain aneurysm, on the very day he was beatified.

The word 'saint' is derived from the Greek word 'hagios' which means 'sanctify' or 'make holy'. Saints are revered as a holy or virtuous, and are believed to go straight to heaven and rule with Jesus, and are said to be able to intercede with God on behalf of those on earth. Patron saintsare regarded in Roman Catholicism as heavenly guardians who can help those in their area of special interest.

For example, St Francis of Assisi loved nature, and has become the patronsaint of animals and ecology. St Anthony is the patron of lost items and missing persons, St Peter is the patron of fishermen, and St George is patron of agricultural workers and equestrians.

Secure now this unique special edition complete set of 12 stunning strikes depicting some of the most popular saints - 12 personal patron saints for your home. The common reverse features one of the most famous paintings by Raphael - 'La Disputa Del Sacramento', the Disputation of the Holy Sacrament.