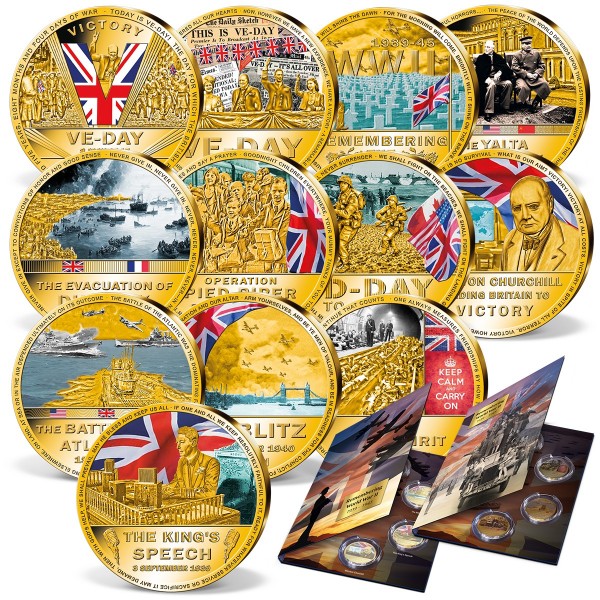 The 'Remembering World War II' complete set is a stunning documentation of the Second World War. Minted in the highest quality 'PROOF', this complete set of twelve gold-layered strikes is highly sought-after by British collectors.

On 3rd September 1939, life for people in Britain changed dramatically: the deadline for Germany to withdraw its invading troops from Poland had passed, so consequentlyGreat Britain declared war on the German Reich. The Second World War lasted for six long years and was the biggest and deadliest military conflict in history: a colossal number of over 60 million people were killed.

Many WWII battles of will be forever engraved in our national memory, including the evacuation of our soldiers from Dunkirk and the German air raids, which tested the resilience of the British people. Prime Minister Winston Churchill became a national hero, with his uncompromising attitude towards Nazi Germany and his rousing speeches that inspired the nation to persevere and ultimately claim victory.

VE-Day - 'Victory in Europe Day', was celebrated on 8th May 1945, when Winston Churchill officially announced the end of WWII in Europe. Millions ofpeople in Britain and the Allied countries rejoiced in the news that Germany had surrendered. Across Britain people exuberantly celebrated the end of the war with spontaneous street parties, dancingand singing.

The events of the years 1939-1945 are still very present in our minds, and we have a duty to ensure that future generations remember all those who lost their lives. A special 'Remembering World War II' complete set of twelve commemorative strikes has been issued, to document the most important British events of WWII. Preciously layered with 24-carat gold and with stunning colour detailing, this exclusive set comes with two collector's albums and is strictly limited to only 9,999 complete collections worldwide.