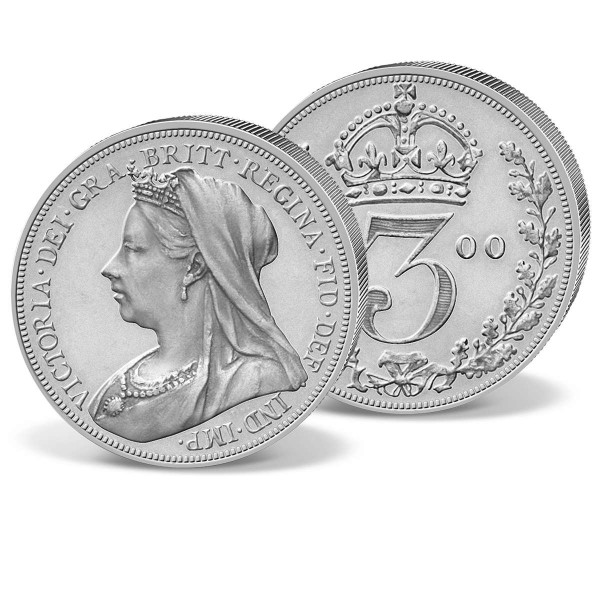 Description
Description
The '3d' or 'thruppenny bit' was first issued in the mid sixteenth century and although it was... more
Close menu
'Queen Victoria' Silver Threepence Coin

The '3d' or 'thruppenny bit' was first issued in the mid sixteenth century and although it was the smallest silver coin regularly struck for circulation, it was once one of the most important methods of payment in Britain - being a piece of silver that the common man could afford. Following WWII silver threepences were removed from circulation and many were melted down. Thereafter they were only ever issued in brass or copper nickel or as Maundy money, hence original silver threepenny coins are quite hard to obtain and as historical records of a great era, they have become highly sought-after by collectors.

This silver coin was minted between 1893 and 1901, the year Queen Victoria passed away. She was the Queen of England and Ireland as well as the Empress of India from 1876 on. To commemorate the early death of her husband Albert of Saxe-Coburg-Gotha, she wore black for the rest of her life. During her 64 :year reign, which went down in history as the 'Victorian Era',Great Britain experienced a boom.

This genuine historical coin was minted over 100 :years ago made of valuable 925/1,000 sterling silver. It features a portrait of Queen Victoria dressed in mourning veil and bears the inscription 'VICTORIA DEI GRA BRITT REGINA FID DEF IND IMP'.