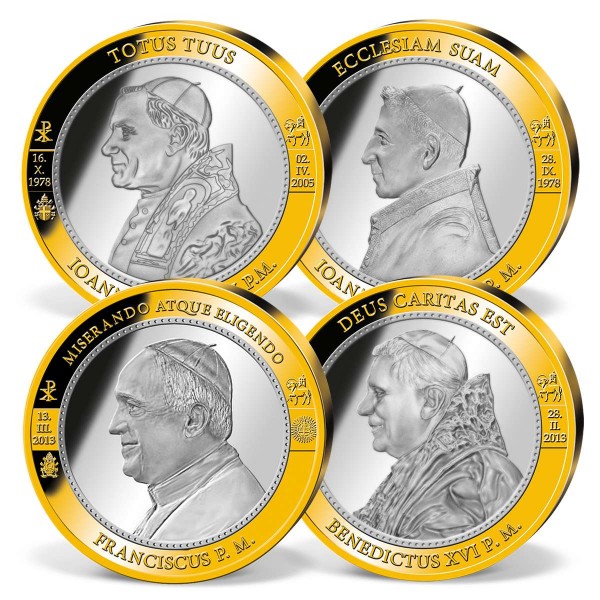 Description
Description
John Paul I was the first pope of modern times to forego the traditional coronation with the... more
Close menu
'Popes of the Modern Era' Supersize Commemorative Strike Set

John Paul I was the first pope of modern times to forego the traditional coronation with the papal tiara, and the first pontiff to choose a double name and add the regnal number I. Mother Teresa described him as 'a sun beam of God's love shining in the darkness of the world'. Tragically, the 'Pope of Smiles' died unexpectedly on the 29th of September 1978, only 33 days after his induction and just 65 years old.

Pope John Paul II was one of the most popular popes in history. Known as the 'Pope of the Century' and 'Peace Agent', he was the most travelled world leader ever, attracting large crowds wherever he went. Since his death, John Paul II has been canonised as a saint by the Catholic Church, and is know as 'John Paul the Great'.

Pope Benedict XVI was inaugurated in 2005, the first pope to replace the papal tiara with a bishop's mitre, even on his personal coat of arms. He referred to himself as 'a simple, humble labourer in the vineyard of the Lord'. He unexpectedly retired in 2013, at the age of 85, the first pope to resign his papacy in 600 years.

Pope Francis is the first pope from Latin America, the first pontiff from the order of Jesuits andthe first pope to choose the name 'Francis', in honour of St Francis of Assisi. This was a deliberate choice, as just like his namesake, Pope Francis lives in modest, humble circumstances and is a champion of the poor, reminding the world to care about poverty.