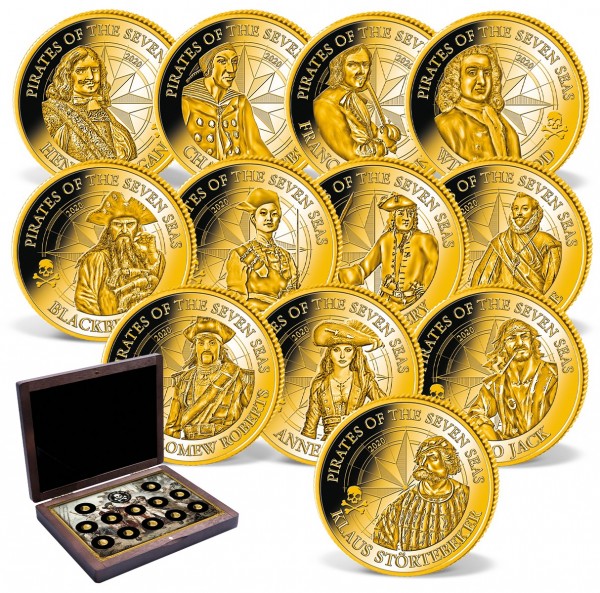 This product is currently not available.
Please inform me as soon as the product is available again.
Amount due: £2,159.00

This stunning set commemorates the world's most infamous buccaneers, privateers, corsairs or pirates, who spread fear and terror on the Seven Seas, and whose stories have fascinated people for many hundreds of years - the 'Pirates of the Seven Seas'.

For example, although Sir Francis Drake was the terror of the Spanish and Portuguese seamen, he is still considered a hero here in Britain. The first Englishman to circumnavigate the globe in three years from 1577 to 1580, he sailed under the flag of the Crown and significantly increased Queen Elizabeth I's wealth - for which he received a knighthood.

Henry Every on the other hand, also known as Long Ben Bridgeman or John Avery, fought the pirates as a British soldier, before becoming a pirate captain himself and capturing British and French ships.

Ever since Captain Charles Johnson published his book 'A General History of the Robberies and Murders of the most notorious Pyrates' in 1724, the figure of the pirate has become legendary - a synonym for courage, rebellion, loyalty to their crew, adventurer, swashbuckler and outlaw. Pirates were surrounded by mystery - voyaging to exotic locations and landing at strange shores. Some raided for their own gain, whilst others acted as privateers in the service of monarchs.

Now, the 12 most infamous pirates have been commemorated with stunning official coins, minted in solid gold and assembled in a strictly limited, sought-after complete collection.