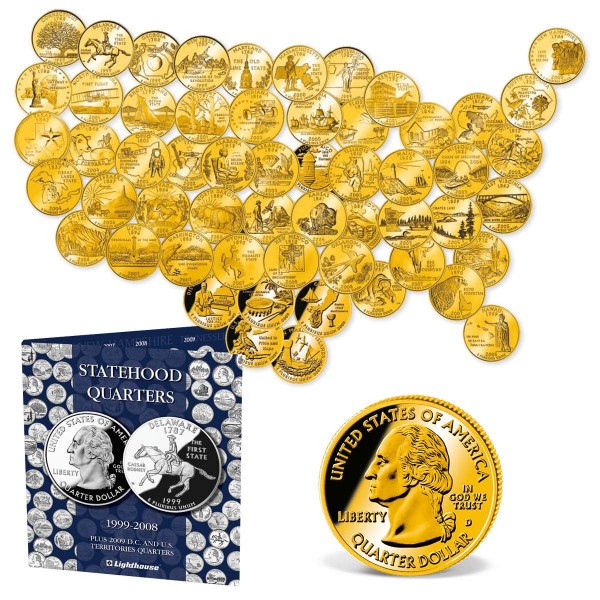 In 1999, the United States Mint initiated a 50 State Quarters Program. The 10 year program honored each of the nation's 50 states in the order that they were admitted into the Union. Each quarter was minted for about 10 weeks and will never be issued again, and the official coins were quickly snapped up by collector all over the world.

The state designs, all created in the featured state, were on the reverse, while the obverse featured the familiar image of George Washington. In 2009, quarters honoring the District of Columbia and the six U.S Territories were added to the series.The program did not only greatly appeal to existing coin collectors in the United States, but has also won over many new collectors in the USA and many other countries, as it is beautiful commemoration of the history of the United States and a program that appeals to young and old.

Available exclusively from Windsor Mint, this incredible set in a strictly limited 'Gold Edition' features all 56 quarters presented together in a beautiful and informative folder. Not only do you have the opportunity to acquire the complete collection - something that would take years to compile on yourown - but each official coin in this exquisite set is brilliantly layered in 24-carat gold! This exclusive 'gold edition' has been strictly limited and due to the high demand by US collectors only asmall number of complete coin sets could have been made available to the British market.