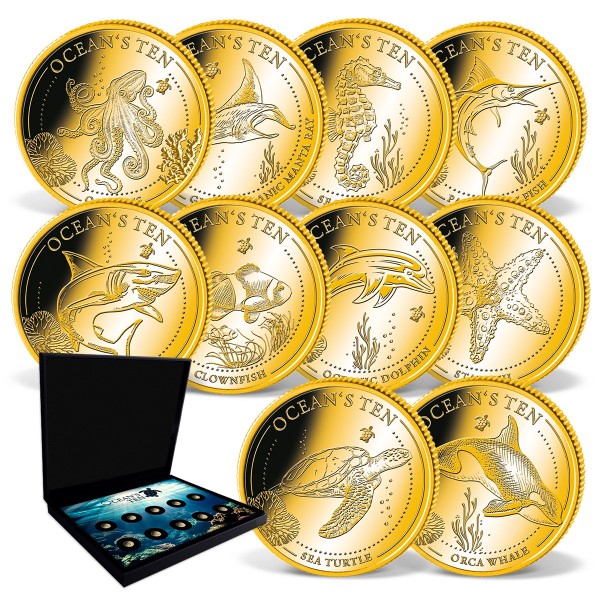 Description
Description
'For most of history, man has had to fight nature to survive; in this century he is beginning... more
Close menu
'Ocean's Ten' Gold Coin Complete Set

'For most of history, man has had to fight nature to survive; in this century he is beginning to realize that, in order to survive, he must protect it.'
Jacques-Yves Cousteau, Oceanographer

Even though over 70 percent of the Earth's surface is covered in water, so much of it remains unexplored, that we actually have better maps of the surface of the Moon, than we do for the bottom of the ocean! Today, with many discussions about how to best conserve nature, the importance of this fascinating ecosystem is becoming increasingly transparent to us - as we get to know more of its amazing inhabitants. There are 228,450 known species in the ocean, and there may be as many as 2 million more as yet unknown. The few sea creatures that we do know are amazing: sharks and dolphins, rays and octopuses, sailfish and sea turtles, seahorses and starfish.

Now, the Island of Niue in the South Pacific Ocean, has issued for the first time ever, a stunning complete set of 10 official gold coins dedicated to the ten most famous sea creatures - a true collector's sensation in solid gold, with a strict limitation of 1,000 sets worldwide, protectedby law.

'Ocean's Ten' - the ten most famous sea creatures:
Seahorses - the males give birth
Starfish - with eyes on their arms
Giant Oceanic Manta Ray - the gentle giant
Sea Turtles - among the oldest creatures on Earth
Octopus - the intelligent cephalopod
The White Shark - the most feared of all sea creatures
The Anemonefish - the clown of the seas
Dolphins - our friends in the sea
Sailfish - the fastest in the ocean Orcas - the 'kings of the ocean'