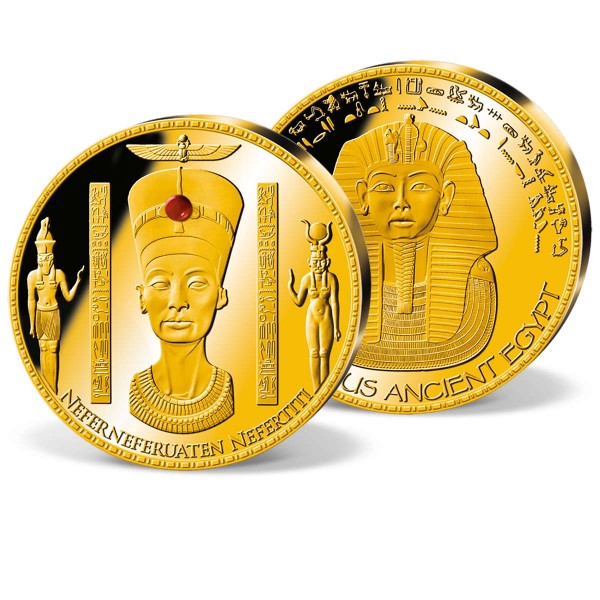 3280 years after the end of the legendary Egyptian Queen Nefertiti's reign, this stunning XXL strike commemorates her famous painted limestone bust, discovered on the 6th of December1912 by the German Oriental Company, led by archaeologist Ludwig Borchardt.

In his diary, he remarked: 'Suddenly we had in our hands the most alive Egyptian artwork. You cannot describeit with words. You must see it.' The beautiful bust of Nefertiti was discovered in the sculptor Thutmose's workshop, and believed to have been crafted around 1345 BC. It has since become aninternational icon of feminine beauty and power.

Nefertiti, meaning 'the beautiful one has come', reigned for 17 years together with her husband, Pharaoh Akhenaten of the Eighteenth dynasty of Egypt. They ruled during one of the wealthiest periods in Ancient Egyptian history, during the 1300s B.C. When Akhenaten died, traces of the beautiful queen disappear in the obscuritiesof history. No-one knows exactly what happened to her. Only her elegant bust remains, witnessing her beauty over the centuries, one of the most copied works of Ancient Egypt and listed as one of TimeMagazine's 'Top 10 Plundered Artifacts'.

Jasper is said to be a nurturing stone that helps with healing and provides protection. In Ancient Egypt, jasper was worn as an amulet and carved into scarabs, the symbol of creation and the rising sun. Carved jasper was often buried with the Egyptian dead to provide safe passage into the after life.

The 'Nefertiti' strike, in XXL format, is preciously plated with purest 24-carat gold and hand-set with a genuine jasper. Exquisitely engraved, the bust of Nefertiti is framed by Egyptian hieroglyphics and the statues of Horus and Isis, two of the most important gods of Egyptian mythology. The reverse features the legendary mask of Tutankhamen.