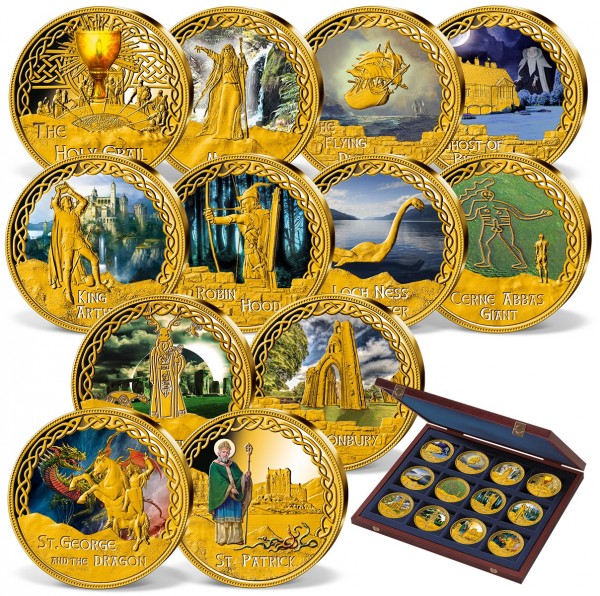 Description
Description
The history of the British Isles is interlaced with many fascinating myths and legends. One of... more
Close menu
'Myths and Legends of the UK' Complete Set

The history of the British Isles is interlaced with many fascinating myths and legends. One of Britain's greatest mythological figures is the legendary King Arthur, who ruled Camelot with his trusted Knights of the Round Table.

Arthur became King of England with help from the wise magician, Merlin. When King Uther Pendragon died, Merlin used his magic to set a sword in stone, with thewords: "Whoso pulleth out this sword of this stone is the rightwise born king of all England". When Arthur was fifteen, Merlin took him to the sword in the stone, and after successfully pulling the sword out, Arthur became the new King.

Arthur is also linked to another famous legend - the quest for the Holy Grail. The Grail was said to be the cup that Jesus drank from at the Last Supper, and was used by Joseph of Arimathea, to catch some of the blood of Christ at the Crucifixion.

According to legend, Joseph of Arimathea brought the Holy Grail with him to England, which hehid in Glastonbury. When he planted his pilgrim's staff in the ground, it miraculously flowered into the Glastonbury Thorn. Glastonbury Abbey is said to be the final resting place of King Arthur and his wife Guinevere.

Other myths speak of folk heroes like Robin Hood, who famously stole from the rich to help the poor. Whilst other legends tell of holy men like Saint Patrick, who is is credited with bringing Christianity to Ireland, and Saint George who has been England's patron saint since 1327. The Saint George's Cross is the main element of the English flag.

Did you know that ...
... George, who became the patron saint of England, was born in Cappadocia, in what is now modern-day Turkey?
... the earliest recorded sighting of a monster living in Scotland's loch Ness dates back 1,500 years? ... the Cerne Abbas Giant in Dorset - an ancient naked figure sculpted onto the chalk hills above Ceme Abbas, is an impressive 180 ft high?