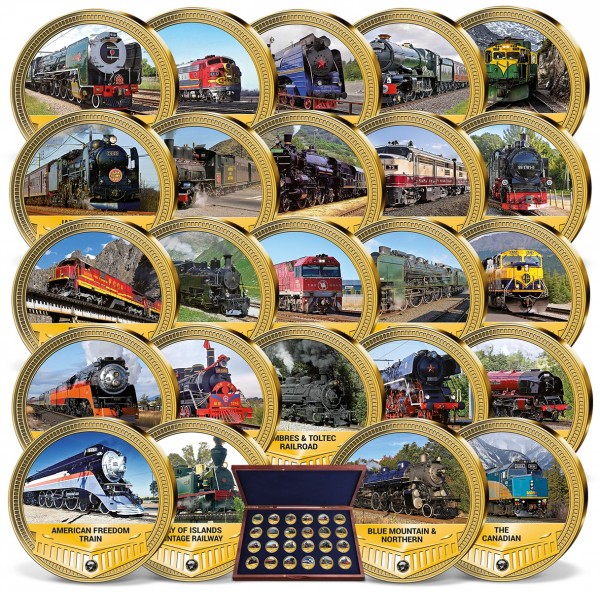 Description
Description
We are blessed with many great railway journeys around the world, which offer nostalgic... more
Close menu
'Most Famous Railways 2021' Complete Set

We are blessed with many great railway journeys around the world, which offer nostalgic travelling in the elegance of a bygone era. What makes the world's most famous railways so fascinating?

It's not just the legendary classics of railway history, which are as varied as they are breathtaking - it's also the legends that surround the trains and their routes. There is, for example, the world-famous White Pass and Yukon Railway, which was built during the Klondike gold rush and still attracts many people to Alaska today. There is the "Rovos Rail", also known as the "Prideof Africa", which runs over 6,100 kilometres from Cape Town past the elephants of Chobe National Park and Lake Victoria to the coast of Tanzania. And, of course, everyone knows the Trans-Siberian Express, which is a place of longing through boundless expanses - countless workers created the famous railway line from Moscow to the Sea of Japan in a gigantic feat of strength.

Now, twenty-four of the most popular railways of all time, which ran, or still run on legendary routes through the most spectacular landscapes, have been selected by railway expects, in order to createa truly special complete set. This unique collector's edition celebrates the romance of train travel with 24 of the most beautiful railways.