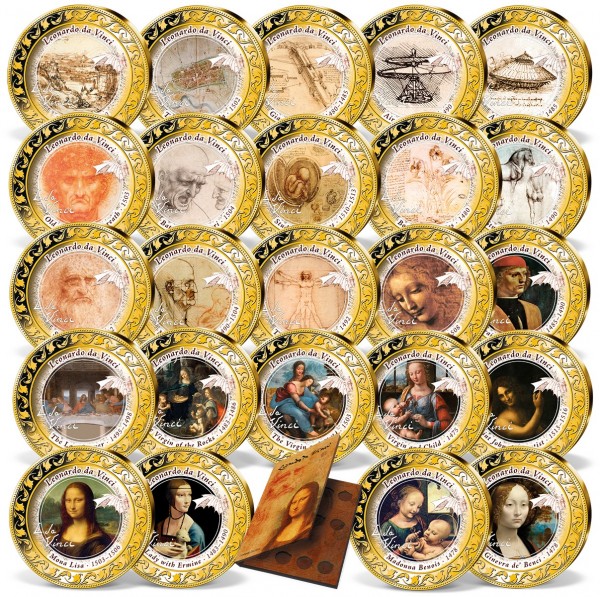 This beautiful collection has been produced in honour of the world's most universal genius - Leonardo da Vinci.

Each stunning strike in the 'Leonardo da Vinci' complete set has been minted in the high quality 'Brilliant uncirculated' and is preciously layered with 24-carat gold. Strictly limited to just 1,452 complete collections worldwide, this exclusive set comes complete in aluxury display case.

Born on 15th April 1452, near the town of Vinci, in Tuscany, Leonardo da Vinci was the illegitimate son of a prominent notary of Florence, Ser Piero, and a local peasant woman, Caterina. The young Leonardo showed so much artistic talent, that his father sent him to work as an apprentice for the renowned Florentine painter and sculptor, Andrea del Verrocchio. It was here that he learnt the basics of painting, sculpture, engineering and technical arts.

In 1478, Leonardo da Vinci became an independent master and set up his own studio. It is rumoured that Verrocchio vowed to never paint again after seeing Leonardo's talent! However, Leonardo was not only an incredible artist, he was also an engineer, scientist, inventor, anatomist, botanist, musician, philosopher and polymath. Leonardo da Vinci the most universal genius of all time, he was the epitome of the true Renaissance man. He died on 2nd May 1519, at the Château du Clos Lucé, in France, where he lived as a guest of King Francis I, and legend says he died in the arms of the King.

Now as a tribute to the greatest universal genius of all time, the 'Leonardoda Vinci' commemorative strike set features 24 of his most famous masterpieces, beautifully depicted on 24-carat gold-layered strikes. What a wonderful way to be able to admire Leonardo da Vinci's work in one complete set.