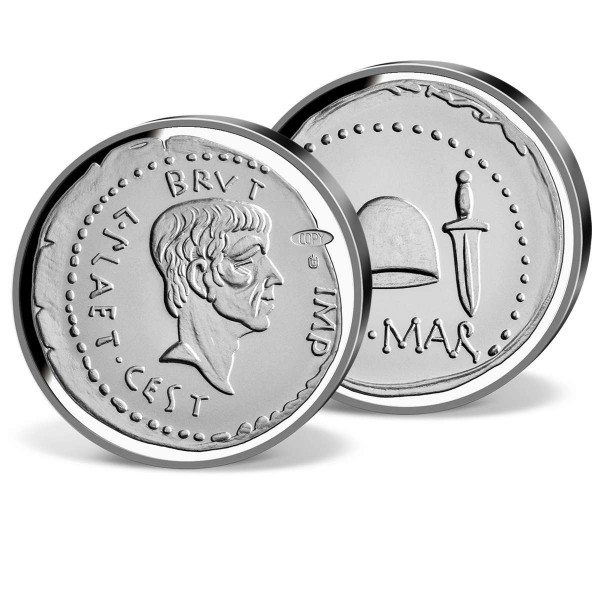 The 'Ides of March' is one of the rarest, and one of the most famous Roman coins - it was minted as a propaganda piece openly celebrating an act of murder: the event celebrated is, of course, theassassination of Julius Caesar on the 15th March 44 BC.

The 'Ides of March' or Eid Mar denarii was struck by Brutus around 42 B.C. On one side features a portrait of Brutus honouring him asa lead conspirator in the assassination of Julius Caesar. On the other side is a liberty cap flanked by two daggers symbolising the knives carried by Brutus and Cassius with the legend in Latin EID MAR 'the Ides of March' the date Caesar was assassinated (15th March 44 BC). Today only some 60 examples of the Eid Mar denarii remain - no doubt because the coin was deliberately recalled and melted down by the victors, Mark Antony and Octavian.

Exclusive to Windsor Mint the "The Ides of March" replica strike is a faithful copy of the original, which sold for $546,250 at auction. Don'tmiss this opportunity to own a new silver plated PROOF museum quality restrike of the famous original for substantially less!