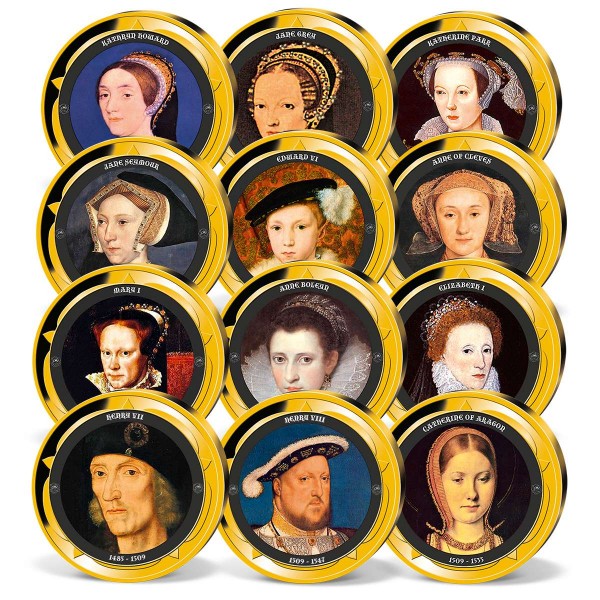 This product is currently not available.
Please inform me as soon as the product is available again.
Amount due: £719.00

Description
Description
When Henry VII became King of England in 1485, nobody could foresee that it was the beginning of... more
Close menu
'House of Tudor' Commemorative Strike Set

When Henry VII became King of England in 1485, nobody could foresee that it was the beginning of one of the greatest Royal dynasties in British history.

The House of Tudor was to lead thedestinies of the country until 1603. Henry VII was the last King of England to claim the crown on the battlefield. Henry VII kept England peaceful, and when he died in 1509, his second son succeeded him. At just under 18 years old, young Henry VIII was celebrated by the people, and was to become one of the most famous kings in British history! He married 6 times and split with the Roman Catholic Church, making himself the head of his new 'Church of England'.

After his death, Henry's 9-year-old son, Edward VI ascended to the throne. Unfortunately, Edward died at the age of just 15, and his cousin, Lady Jane Grey, was named as next in line for the throne. She became Queen, but only reigned for 9 days, until Edward's half-sister, Mary Tudor claimed the throne.

Mary Tudor became the first Queen Regnant of England, but her executions of religious dissenters earned her the name 'Bloody Mary'.

When Mary died at the age of 42, her half-sister Elizabeth, thedaughter of Anne Boleyn, became Queen. Elizabeth I established a period of true prosperity, known as the 'Elizabethan golden age'. Her death ended the great era of the Tudors.

This beautifulset of commemorative strikes, masterfully plated with 24-carat gold, is a tribute to the legendary House of Tudor, that ruled England from 1485 to 1603.