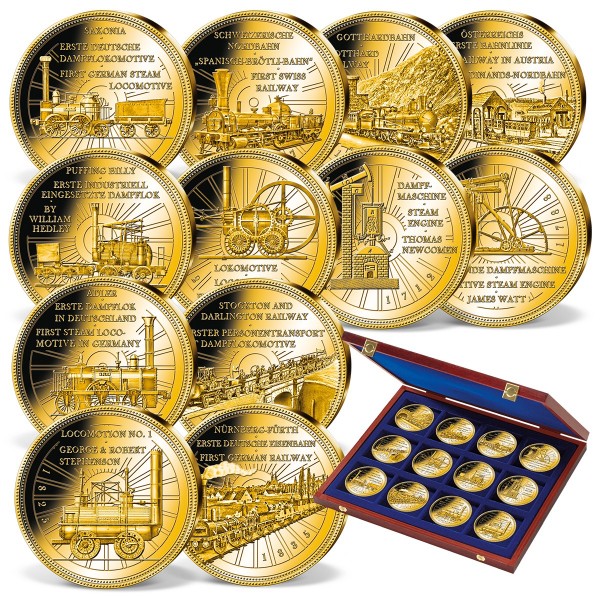 Description
Description
2020 marks the 195th anniversary of a British engineering triumph: the opening of the Stockton... more
Close menu
'History of the Steam Train' complete set

2020 marks the 195th anniversary of a British engineering triumph: the opening of the Stockton and Darlington Railway, the world's first steam locomotive public railway, built under the guidance of British chief engineer George Stephenson. Huge crowds watched Stephenson at the controls of his locomotive, as it pulled a railway passenger coach and 36 wagons filled with sacks of coal and flour, along with some 600 passengers. It was a great success for steam locomotives, first developed in the United Kingdom and used for railway transport all over the world until the middle of the 20th century.

Now, 195 years since the world's first passenger railway was officially opened, the most significant steam engine milestones in history have been commemorated in one stunning set. Finished with pure 24-carat gold, this numismatic rarity is a perfect keepsake to document the exciting history of steam engines.

This meticulously designed, officially sold-out set features stunning, detailed motifs dedicated to the pioneers in steam engineering: Richard Trevithick, Thomas Newcomen, James Watt, George Stephenson and his son, Robert Stephenson. This sensational collector's edition commemorates many important milestones in the history of steam locomotives from Great Britain, Switzerland, Germany and Austria. Each strike in this set is fully layered with 24-carat gold and presented in its own protective capsule to preserve it for generations to come. This exclusive set comes in an elegant display case and is strictly limited to only 9,999 complete sets worldwide.