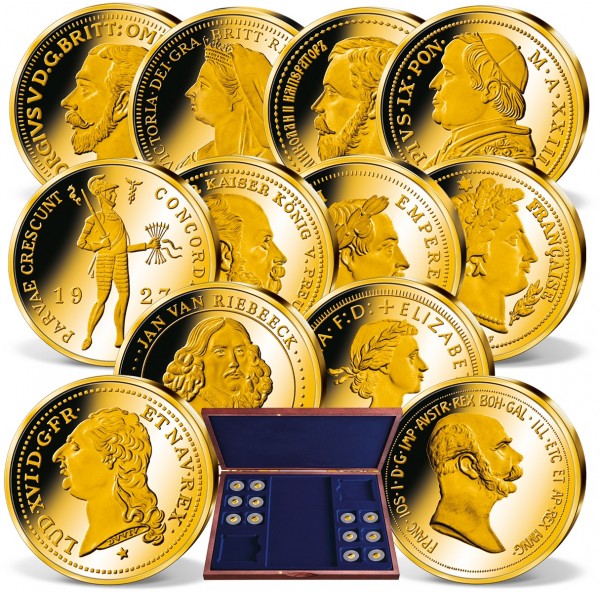 The 'Gold Treasures of Europe' complete set of twelve solid gold strikes, is a stunning tribute to Europe's most valuable gold coins. This exclusive complete set includes stunning replicas of threeBritish gold coins - the Victoria 'Veiled Head' Sovereign, the George V Sovereign and the Queen Elizabeth II Sovereign. As well as beautiful reproductions of the 20 Lire Pius IX issued by the Papal States, the 15 Rubles of the last Russian Tsar Nicholas II, and the 100 Corona celebrating 60 years reign of Franz Joseph I.

The original coins are very expensive and are out of reach for most collectors. But now you can enjoy all the beauty of these magnificent golden treasures, with a stunning collection of twelve strikes, minted in solid gold. The complete set comes in an elegant display case and is strictly limited to only 5,555 complete collections worldwide.

Wilhelm I 20 Mark 1871
Wilhelm I became King of Prussia in 1861 and was proclaimed the first Emperor of Germany in 1871, in the Hall of Mirrors at the Palace of Versailles.

Franz Joseph I 100 Corona 1908
Franz Joseph I became Emperor of Austria in 1848 and King of Hungary in 1867. He founded the Dual Monarchy of Austria-Hungary. The impressive 100 Corona Franz Joseph I strike is a stunningreplica of the gold 100 Corona coin issued to commemorate the 60th anniversary of the reign of Franz Joseph I, which features the beautiful 'Lady in the clouds' on the reverse.

Napoleon III 100 Francs 1869
Louis-Napoléon was President of the French Second Republic. He crowned himself Emperor of France and founded the Second French Empire.

Knight Ducat 1927
The Gold Knight Ducat was one of the world's most important trade coins in the 16th century, and was issued with the motif of a standing armored knight.

Pius IX 20 Lire 1869
Pope Pius IX was head of the Catholic Church from 1846 to 1878. He was the longest-reigning Roman Pope and the last pope to rule over the Papal States.

Nicholas II 15 Rubles 1897
Nicholas II was the last Tsar and Emperor of Russia (1894-1917) under Romanov rule. He was executed together with his family by Bolsheviks in 1918.

Victoria Sovereign
Victoria ascended to the throne at the ageof 18, in 1837. Her reign, known as the Victorian Era, lasted for almost 64 years - longer than any of her predecessors. Victoria Sovereign, which is commonly known as the 'Old Head', 'Veiled Head' or 'Widow Head'. The obverse features the regal, more mature portrait of Queen Victoria, with a veil draped over her crown, designed by Sir Thomas Brock. Along with the Latin inscription 'VICTORIADEI GRA BRITT REGINA FID DEF IND IMP' which translates to 'Victoria, By the Grace of God, Queen of Britain, Defender of the Faith, Empress of India'.

George V Sovereign
George V became King in 1910. During WWI, he changed the royal family name from the Germanic Saxe-Coburg-Gotha to the English House of Windsor.

Louis d'Or 1786
Louis XVI was King of France from 1774 to 1792. He was overthrown during the French Revolution and was executed for treason by guillotine in 1793.

Jan van Riebeeck 1 Rand
The 1 Rand was dedicated toDutchman Jan van Riebeeck, who established a Dutch colony on the Cape of Good Hope and founded Cape Town in 1652.