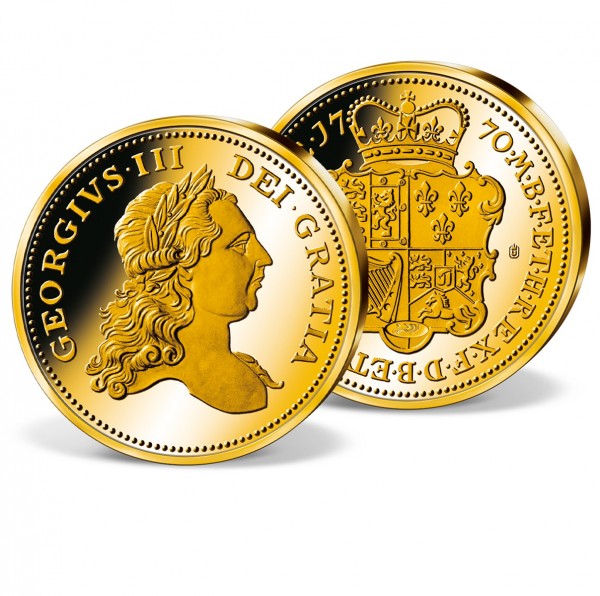 In 1760, George III became King of Great Britain and Ireland, and Elector of Hanover.

He is widely remembered for the loss of the colonies in North America, following the American War of Independence. However, he was far more successful in Great Britain and Europe: with victories over Napoleon at Trafalgar and Waterloo, Britain emerged as a leading power and ended Napoleon's domination in Europe. George III was the third monarch from the House of Hanover, and the first one to be born in England and to use English as his first language.

His later years were overshadowed by a mysterious mental illness, and when he became unfit to rule, his eldest son ruled as Prince Regent. George III died at Windsor Castle on 29th January 1820, after a long reign of almost 60 years. It was also the end of an era for the British Gold Guinea, which was replaced by the Sovereign in 1813.

George III Five Guineas gold patterns were made in 1770, 1773, and 1777, but were never issued into circulation, so they only ever existed as a pattern issue for each of the three years. The gold patterns were only struck in the smallest quantities - it is believed there are less than ten of each date. They are obviously extremely rare and it is thought that just three of each year have turned up in the last 45 years.